Walk into any bookstore and you will easily find more volumes devoted to The Beatles than any other musical group. Some range from the pathetic to the encyclopedic. I have recently read a trio of diverse biographies that couldn’t be any more different in tone and purpose.

The Lives of John Lennon by Albert Goldman (1988) I am not sure why I waited so long to finally read this book. It caused such a firestorm upon it’s release that maybe I couldn’t take it seriously. He portrays Lennon as a total scumbag degenerate who wasn’t past lying, adultery, abuse, rape and even murder! You think that’s bad, Goldman portrays Yoko in an even worse light. After awhile it gets a tad redundant and somewhat disingenuous. At what point is Goldman even attempting to tell the truth? 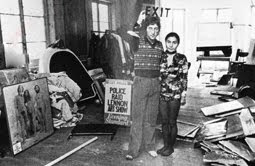 Case in point, as minor as an example as it may be, is how he simply states that for the famous Two Virgins cover shot, there was actually another person in the nude standing next to the new lovers. In actuality, a fan made a poster as a joke that had him manipulated into the photo and sent it to John and Yoko. They thought it funny enough to actually frame it to eventually hang in their living room. To base a ‘theory’ simply on a photograph is irresponsible and kind of destroys any little credibility Goldman had and makes it hard to believe most about what he writes.

Here, There, and Everywhere by Geoff Emerick (2007)

Figuratively stumbling into one of the most important roles in rock history as The Beatles influential engineer at age 15, Emerick does bring a unique perspective to everything Fab. Unfortunately, he is nauseatingly biased in his idolatry of Paul and in utter contempt of the rest of the group. In his eyes, John was a junkie, George was an untalented hack, and Ringo was the luckiest S.O.B. who contributed virtually nothing the the success of the group. Even if his lopsided praise is warranted, after awhile it gets old

This was a great read. Exhaustive in scope, it doesn’t hold punches but unlike the first two, has an objective air about it that exposes some warts but doesn’t veer towards slander. Not only the best book about the band but one of the most well written biographies I have read period.