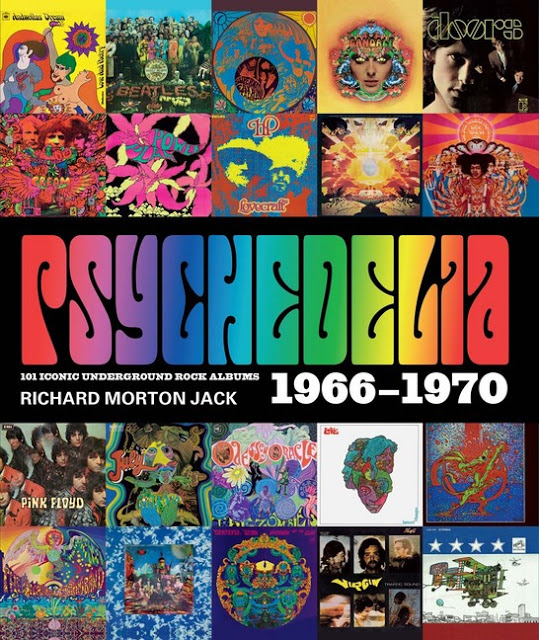 As I gear up for the fast approaching 50th Anniversary of the Summer of Love, I will be highlighting some very cool new books to add to your library.

O.K., true story… I was hanging out one night in the mid-eighties when my brother called me up to ask if I wanted to catch a blues guitarist at The Decade. I snobbishly (and stupidly) said, “Blues? The only good music is psychedelic music!” You see, I was obviously going through a phase and was really into anything remotely psych and blues wasn’t it. That musician was Stevie Ray Vaughan and I blew the chance to see him in a small club at the start of his career. I will never forget my brother’s reaction, “You’re an idiot.”

As right as he was, I eventually calmed my passion for psychedelic music but still have an affection for it to this day. This new book by Sunbeam Records co-founder Richard Morton Jack via Sterling Publishing simply called Psychedelia, details 101 essential albums from the Sixties with background information and contemporary observations on how they fit into the times for each. By limiting one album for each artist, you get a wealth of material to explore by noting many obvious choices (Sgt. Pepper’s Lonely Hearts Club Band, The Piper at the Gates of Dawn, and Anthem of the Sun) along with many more rarities (Begin, Ptooff!, and Autosalvage) that can be discovered thanks to modern day technology (YouTube is your friend, as implied by the author.)

Along with a detailed timeline of all things Psychedelic in culture, notable singles from U.S., Britain and European bands, a list of notable rock festivals, and more, this lavishly illustrated coffee table sized tome is the perfect appetizer to get you ready for the next couple of months.