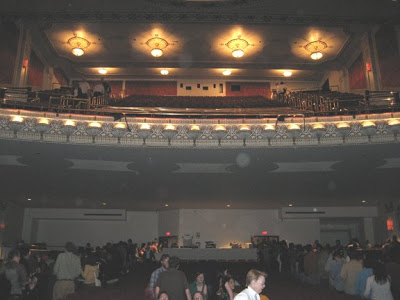 Califone opened up for Iron & Wine last night in Greensburg at The Palace Theater. First off I have to say what a venue. These old refurbished turn of the century movie halls that are hosting shows lately are damned terrific. Sure Greensburg is an hour drive from home but so far it’s by far the coolest place to see a concert. They have an outdoor smoking garden that’s TOO easy to sneak my camera into. Next time!

As for Califone, they were good given the seven songs they were able to squeeze into the half hour allotted. Super nice fellas to boot. Tim mentioned they will have a new album recorded by the end of May hopefully. I really wish I was more familiar with their stuff to appreciate the set.

One a side note, R.I.P. Danny Federici. The third concert of my life was seeing the E Street Band in 1980.