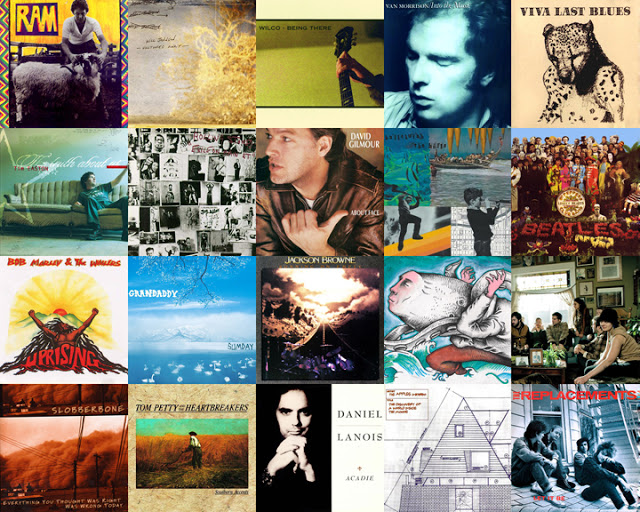 In deciding to compile this list, I tried to be as honest as
possible in that I found myself several times resisting the urge to
include albums or musicians that I ‘thought’ I should have on my list
but don’t necessarily listen to all that much. For example, there’s a
reason I don’t have any jazz on here. I don’t find myself reaching for
Miles Davis over R.E.M. so why be a poseur and include it? These are
favorites…’MY favorites’.
A few notes: I shied away from
live albums (hence, no “The Last Waltz”), greatest hits (with one
exception), compilations and having more than one album from a
particular band. What, was I going to list the ENTIRE Beatles catalog? A
few times I did include multiple albums from a songwriter whether it
was a solo album or offshoot band, so you may spot a few repeats in that
respect. I also could have easily included many local Pittsburgh
releases but decided to keep them for a separate list coming soon.
With
that being said, I hope you enjoy this list as much as I had making it.
Hopefully in putting this together, you the reader, will discover
something you
never heard before or reacquaint yourself with a long,  forgotten album.
Look out for the remaining
installments here every Sunday.

As each installment of this list goes by, it’s becoming clear to me that so many of these albums could easily be higher in the ranking. Getting down to the nitty gritty, for sure.
Check out the previous entries for #41-60, #61-80, #81-100 and the albums that almost made the cut.

21. Paul and Linda McCartney-Ram (1971)
The best post-Beatles solo album, period. Bold statement for sure but what seemed as an exercise by Sir Paul to become comfortable in the studio by himself, has become THE essential go to record when any music fan wants to hear what the best band in the world became after their split.
Choice Tracks: ‘Too Many People‘, ‘Monkberry Moon Delight‘, ‘Eat At Home‘.

22. Will Johnson-Vultures Await (2004)
I credit this album for ‘waking me up’ to begin discovering the world of indie music. Will Johnson’s second solo album made me realize that to find great music, you must be open to explore bands and musicians that might be under the radar but the result can change your life, as it has mine. For that, I am eternally grateful to him.
Choice Tracks: ‘Just to Know What You’ve Been Dreaming‘, ‘Closing Down My House‘, ‘Vultures Await‘.

23. Wilco-Being There (1996)
I was lucky enough to catch the tail end of this tour in San Francisco at the Fillmore on my honeymoon where Jeff Tweedy invited me onstage to drunkenly serenade my wife. Pretty damn cool.
Choice Tracks: ‘I Got You (At the End of the Century)‘, ‘Outtasite (Outta Mind)‘, ‘Forget The Flowers‘.

24. Van Morrison-Into the Music (1979)
My dad was a huge influence on my musical tastes. He loved ‘Van the Man’, especially this lesser-known album of his which will always bring back memories of driving around with my old man as he played this cassette constantly. Seek this out.
Choice Tracks: ‘Bright Side of the Road‘, ‘And the Healing Has Begun‘, ‘Full Force Gale‘.

25. Palace Music-Viva Last Blues (1995)
Before he was Bonnie ‘Prince’ Billy, Will Oldham was Palace Music. This is one beautifully weird, dark record. “If I could fuck a mountain…”, seriously? I was a drunken Palace ‘groupie’ for a couple days as a buddy and I traveled to see Will (pre-beard) play a few solo shows in Ohio in the late 90’s. Man, those carefree days were such a blast.
Choice Tracks: ‘More Brother Rides‘, ‘The Mountain Low‘, ‘New Partner‘.

26. Tim Easton-The Truth About Us (2001)
I’ll always think of Tim as my favorite ‘acoustic troubadour‘. This second album has him playing with the then rhythm section of Wilco and the full band treatment suits him just fine.
Choice Tracks: ‘Bad Florida‘, ‘I Would Have Married You‘, ‘Happy Now‘.

27. The Rolling Stones-Exile on Main St. (1972)
Not a single bad song on this sprawling double album. The run of releases these guys had starting with “Beggar’s Banquet” and ending with this one is impossible to match in rock and roll.
Choice Tracks: ‘Torn and Frayed‘, ‘Sweet Black Angel‘, ‘Loving Cup‘.

28. David Gilmour-About Face (1984)
Gilmour’s second solo album came out about the same time I was getting into Pink Floyd hard. He toured for this album and I caught the show at the Syria Mosque. What has become a forgotten album in rock history still holds up for me to this day.
Choice Tracks: ‘Murder‘, ‘Love On The Air‘, ‘All Lovers Are Deranged‘.

29. Hallelujah The Hills-Collective Psychosis Begone (2007)
This little band from Boston is like a yet to be discovered secret that me and a few handful in Pittsburgh know about. I flipped out the first time I heard this, their debut and the following two full-lengths and smattering of EPs are all just as good. When I asked them to sign this CD the first time they played Pittsburgh, I was told that this was the first autograph request they ever received. Super nice guys to boot.
Choice Tracks: ‘To All My Scientist Colleagues I Bid You Farewell‘, ‘Wave Backwards to Massachusetts‘, ‘Hallelujah The Hills‘.

30. The Beatles-Sgt. Pepper’s Lonely Hearts Club Band (1967)
This was released the month I was born, ‘The Summer of Love’! It’s The Beatles. What can I say that hasn’t been said about what most declare the greatest album of all-time? Nothing but Sir Paul and I share that birthday!
Choice Tracks: ‘Sgt. Pepper’s Lonely Hearts Club Band‘, ‘Lucy in the Sky with Diamonds‘, ‘A Day in the Life‘.

31. Bob Marley & The Wailers-Uprising (1980)
Why this album? The tunes on here are just so damned catchy. This is his greatest hits in my opinion. Except for a couple, you never hear these songs on the radio, which is such a shame. His last show ever was in Pittsburgh  touring behind this album. Boom!
Choice Tracks: ‘Coming In From The Cold‘, ‘Real Situation‘, ‘Redemption Song‘.

32. Grandaddy-Sumday (2003)
In the great Napster purge of the mid-Aughties, I discovered Jason Lytle and his band Grandaddy. Take my word for it when I say it was intense. Demos, live stuff, everything and anything you can imagine, I probably heard from this band at one time. Thankfully, they released this gorgeous collection of songs around that time and toured, hitting Pittsburgh (opening for the totally mismatched Saves The Day) upstairs at Club Laga before eventually breaking up. I vividly remember that set. Jason jamming  on ‘Lost on Yer Merry Way’ as he was more into the screen projections than playing for the fans (the three of us) or really playing at all? The end of the band before my very eyes.
Choice Track: ‘The Group Who Couldn’t Say‘, ‘The Go for in the Go-For-It‘, ‘El Caminos in the West‘.

33. Jackson Browne-Running on Empty (1977)
If my Q&A was called Third/Last, this would be mentioned as the third album I ever bought . As a ten year old with a new family turntable for the first time, it was difficult not to notice this album as it was everywhere that year. Remember when albums had fold out sleeves and pictures all over them. Gazing at that simple spread for hours listening to the songs over and over again made an impact on me that has me appreciating this album now. Notice the word album.
Choice Tracks: ‘The Road‘, ‘Shaky Town‘, ‘The Load-Out/Stay‘.

34. Okkervil River-Down the River of Golden Dreams (2003)
You know when you stumble upon a band and they rock your world with that album and you love it so much you begin to dig deeper into the catalog and then discover their previous album was even better than the newest one? This is how I found Okkervil River. They actually played Garfield Artworks on this album tour and I wasn’t there. I wasn’t at the Quiet Storm coffee house when The Decemberists played that same year and neither were you so we both lose.
Choice Tracks: ‘Blanket and Crib‘, ‘Seas Too Far To Reach‘, ‘It Ends With a Fall‘.

35. Dark Dark Dark-Bright Bright Bright (2010)
This five song EP was my favorite release of that year. I was obsessed with this thing. I listened to this till I was sick of hearing it. Left it for awhile then listened the hell out of it again. I never have and hopefully never will do that again but I can tell you, I still love and listen to this frequently.
Choice Tracks: ‘Wild Goose Chase‘, ‘Flood‘, ‘Something For Myself‘.

36. Slobberbone-Everything You Thought Was Right Was Wrong Today (2005)
This amazing band’s best album. I realize many people have never heard of some of the musicians on my list. Please check them out. I cherish the fact that these guys played Club Cafe in 2001 and I was there.
Choice Tracks: ‘Placemat Blues‘, ‘Meltdown‘, ‘Pinball Song‘.

37. Tom Petty and the Heartbreakers-Southern Accents (1985)
When I graduated from high school, my older brother gave me this album on cassette. Whether it was the gesture of the gift or not, which could very well be, this remains my favorite Petty release. Blasting it that summer was so much fun. Free of the confines of having to go to school and not worrying about the future at all. This was part of the soundtrack to that moment in my life.
Choice Tracks: ‘Don’t Come Around Here No More‘, ‘Rebels‘, ‘Southern Accents‘.

38. Daniel Lanois-Acadie (1989)
The very first CD I ever bought turned out to be an impulse buy at Eide’s that I have surprisingly enjoyed more over the years than I should have. This little known gem has major contributions from his famous collaborators in Bono and Aaron Neville but his songs are the highlight. My biggest surprise with this album came with the only time I saw Jerry Garcia solo and he played ‘The Maker‘. I seriously imagined I was the only one in the auditorium who knew the tune.
Choice Tracks: ‘The Maker‘, ‘Ice‘, ‘Still Water‘.

39. The Apples in Stereo-The Discovery of a World Inside the Moone (2000)
For me, this album is the epitome of everything the Elephant Six stood for. Fun, slightly psychedelic, power pop that is accessible as anything that out of that weirdo camp. Believe me, weirdo is good. Apples leader Robert Schneider is one weird as hell dude, as well as beautiful, nice and talented. I still can’t believe he honored my favorite song request (‘Stream’) minutes before he took the stage the only time I have been lucky enough to see his band. So great.
Choice Tracks: ‘Stream Running Over‘, ‘Submarine Dream‘, ‘Go‘.

40. The Replacements-Let It Be (1984)
Of all places Rolling Stone Magazine turned me onto this band (and this album in particular) when they ranked it on one of the mags seemingly endless lists they featured in the 90’s. On a whim I bought the CD and was floored by the energy of the balls out rock tunes but also the slower ballads. Never saw the band live but had a few chances back in the day. My loss. My total loss.
Choice Tracks: ‘Unsatisfied‘, ‘Gary’s Got a Boner‘, ‘Androgynous‘.