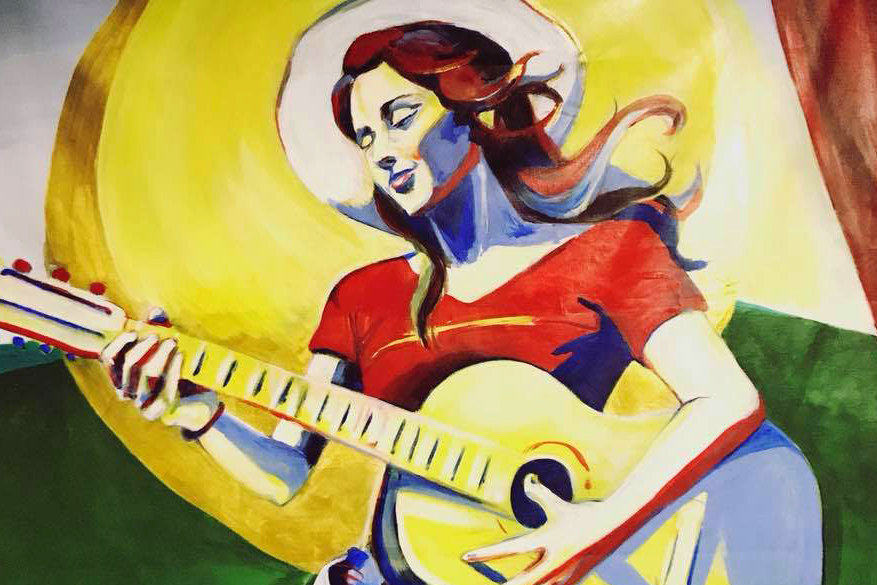 “A thoughtful, honest songwriter with a unique voice ranging from mellow to full, balancing between traditional folk and outsider.“

Berry Breene is a folk musician who also is an accomplished visual artist. Her vibrant work ranges from commissioned portraits and landscapes to public murals dotting Western PA public spaces. Her solo music reflects her art in a simplistic, traditional folk manner, as well as being a member of the band Her Ladyship where her harmonies and musicianship blend into a beautiful, ethereal sound. I want to thank Berry for taking the time to participate in this edition of First/Last.

The first album you ever bought?
Ace of Base : Happy Nation/The Sign. I listened to it on repeat all summer. I was lucky to be the youngest with two older siblings who loved music. Tom Petty Wildflowers and REM Automatic for the People were two of the first hand-me-downs from my sister. I stole Weezer Blue Album from my brother.

Your last album bought?
Waxahatchee : Out in the Storm.

Favorite album of all time?
(self imposed rule of not including greatest hits or “essential” artist collections):

The Freewheelin’ Bob Dylan
Fleetwood Mac: Rumours
Weezer: Pinkerton
Neutral Milk Hotel:  In the Aeroplane Over the Sea
Rilo Kiley The Execution of All Things

Least favorite/most disappointing album?
I wanted to get into Father John Misty but couldn’t.

First concert attended?
The Allman Brothers Band (it could have been Paul Simon and Bob Dylan, but I was a young fool and didn’t know any better and regret the decision to this day).

Favorite concert ever?
Built to Spill in 2013. They knocked my socks off.  Aretha Franklin at Heinz Hall in 2015, I was in tears.

Least favorite concert?
Warped Tour 2000 at the now-defunct IC Light Amphitheater. I wasn’t wearing proper footwear and lost my sandals; my friend gave me a piggyback ride over the bridge. The music wasn’t memorable.

Favorite thoughts, experiences about Pittsburgh?
I love the rolling hills and river valleys and viewing them from my kitchen window. I am enamored daily by the way the atmosphere changes the colors of the hills rolling into the distance. In visual art we mimic the color-change phenomenon using atmospheric perspective; it’s one of my favorite things to paint. I am grateful to witness this nature in an urban setting everyday. I love Pittsburgh’s age, history and scars. I love her old brick buildings and houses from millworker row homes to mansions showboating the spoils of the industrial revolution.

I also like making music with my bandmates in Her Ladyship!

Thanks, Berry. There are always regrets in who to see when the chance was there. Mine will always be Stevie Ray Vaughan at The Decade. What was I thinking when I passed on the offer?