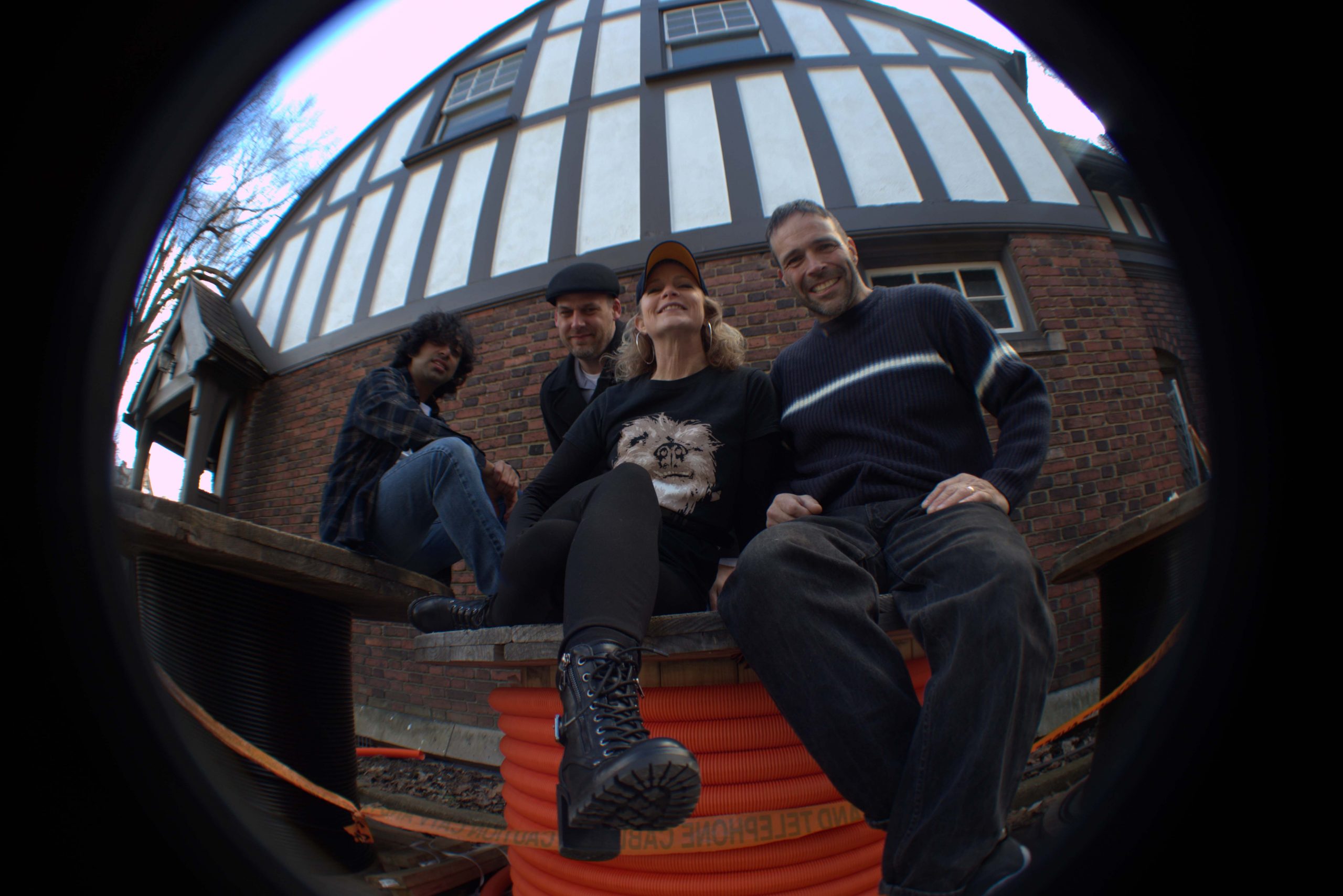 “The way music evokes feelings, memories, and mental pictures is powerful and magical.“

Hell’s Oasis is a Pittsburgh based multi-genre band who fuse progressive rock with funk and punk. They’ve added trip-hop, singer-songwriter, and folk styles to their repertoire. This is evidenced on their latest release from July, the single “Lilacs”, which draws you in with echoing guitar and dreamy vocals with segue into an energetic guitar solo, grounded by a poppy sax line. I want to thank Alexis Polozoff (Guitar), John Rheaume (Saxophone), Abhishek Ravi- (Bass), and Ginger Polozoff (Vocals) for taking the time to participate in this edition of First/Last.

The first album you ever bought?
Alexis Polozoff: Dark Side of the Moon.
John Rheaume: Do I have to answer this one? OK, when I was 9 years old, I got To the Extreme by Vanilla Ice. But in my defense, I was 9 and I most certainly wasn’t the only one! Seriously, I still think it’s an OK album especially for a One Hit Wonder.
Abhishek Ravi: Buying albums wasn’t really a thing in our household! We owned a cassette player at home and had one in the old car and my parents bought a couple of tapes. I guess I might’ve been in the 7th grade when we went to Planet Music, which was the new big music store in the city, and I could afford one CD, so I bought a Best of Evanescence compilation album. Still a pretty solid choice I’d say!
Ginger Polozoff: Saturday Night Fever. O.M.G! The Bee Gee’s harmonies! Also, I fancied I was quite the disco dancer. Jazz splits were my specialty.

Your last album bought?
Alexis: Moorcheba.
John: The last one I bought is actually 40 years old – Wizard Island by Jeff Lorber Fusion. Lorber has put together a lot of great bands together, and this one features a very young Kenny Gorelick before he became a household name as Kenny G. Now, you can’t argue with the mainstream success he has had, but I like the old (young?) Kenny a lot better. He had this killer R&B sound on the tenor back then. Anyway, the tracks are really funky with great basslines and drumming. Jeff’s improvised solos are really impressive.
Abhi: Wow it’s been a while! I guess I must have been in the 11th grade before everything went handheld and online. I went back to the same store and bought Metallica’s Reload. Had a great time ripping high quality tracks off the DVD so I could put them in my little MP3 player.
Ginger: Uhhh… it’s been a while, but I think it was Wilco’s A Ghost is Born and Ryan Adams’ Easy Tiger at the same time. But who buys albums anymore? I download singles. Probably the most recent single I bought was “Gimme All Your Love” by Alabama Shakes.

Favorite album of all time?
Alexis: Abbey Road
John: The Stranger by Billy Joel. You know you have a great album when you crank out four hits knowing that several more would have been hits on any other album. It really turned his career around, in fact it might have even saved it all together because besides “Piano Man”, he really hadn’t achieved much commercial success. The Stranger had a huge impact on me. I was actually introduced to “Just the Way You Are” after we played it in my middle school jazz band. I went out to buy the entire album, and I still have the CD 26 years later (it still plays!)
Abhi: I have far too many, so the less thought I put into this, the better. Still Life by Opeth is definitely my all-time favorite. It’s an excellent concept album that tells the story of a banished tribe member returning to reunite with his lover. It’s a progressive death metal masterpiece that explores everything from bone-crunching riffs to smooth jazz and acoustic ballads. I love each and every track.
Ginger: My “favorite” album changes over time. For many years it was Van Halen’s Women and Children First and though that album has faded in popularity, it still has its hooks in me. I discovered The Beatles’ Abbey Road as an adult. That’s probably my favorite rock album. However, going in a completely different direction, Flower Duet by Léo Delibes and Claire de Lune by Claude Debussy are probably the two songs I never tire of.

Least favorite/most disappointing album?
Alexis: Dark Side of the Moon. Would listen to album with puffy 80’s head phones after swim practice. I’d fall asleep to the music and be woken up by the alarm clocks in the song time.
John: All I can say is, critics have a tough job and I’m not a critic! I plead the fifth.
Abhi: Hahaha, I feel like I just have least favorite songs or even genres. Why listen to a whole album when a single track isn’t good.
Ginger: Alannah Myles. I only liked two songs on it.

First concert attended?
Alexis: Saw Genesis with my sister at Madison Square Garden when I was 17. Still remember Phil’s face spot lit while the garden is in total darkness. Next song, “In the Air Tonight”.
John: Not too surprisingly as a young saxophonist it was Kenny G in 1994. I feel his studio recordings are quite vanilla, but his touring band was actually really tight. He had Vail Johnson on the bass, who had the ability to do the unthinkable: put some soul and funk into elevator music.
Abhi: Iron Maiden, Rock ‘n India 2006 in Bangalore. I wasn’t allowed to go unaccompanied, so my dad came along and we had a great time! It was a legendary show and they were touring right after releasing A Matter of Life and Death, another kick-ass album. A steppingstone to much heavier concerts I’d eventually attend.
Ginger: AC/DC in Hammersmith Odeon, London. It blew my mind!

Last concert?
Alexis: Willie Nelson. Glad I got to see a legend and a real inspiration. Willie played the whole set standing, and had lots of improv solos! At 86 I hope I am still playing!
John: Not including local shows, I’ve been slacking in this department. I went to the Pittsburgh Jazz Festival last year which was great.
Abhi: Was lucky enough to catch Opeth at the Apollo in New York this February, before the world caught fire. It was the third time seeing them live and it was spectacular!! Although it was a seated concert which made absolutely no sense to me.
Ginger: Willie Nelson, last summer. As a native Texan, I had to see him. He’s a national treasure. And he was great!

Favorite concert ever?
Alexis: Santana.
John: I saw Ben Folds in Boston when he was doing a solo tour: Literally just him with no bass and drums. It was a totally different way to hear his music and he was great at getting the audience involved. They recorded it and he used a couple songs on his Ben Folds Live album. Also, our show was picked as the album cover depicting him hanging his head in shame as we (the audience) flip him off as if we were booing him off the stage. It was awesome to be a part of the production.
Abhi: Lamb of God came to my hometown of Bangalore back in 2011. This was my first ever heavy metal concert with a lot of my favorite metal bands from India opening for Lamb of God. I had my first mosh pit, ran in the wall of death and had an absolute blast. Woke up with a terrible neck ache but totally worth it!
Ginger: Texxas Jam (yes, two Xes) 1986. It was hot; we were crushing each other against the stage (no one even thought about how dangerous that could’ve been); they were spraying us with firehoses; women were on men’s shoulders; got thrown over the barricade next to the stage—sopping wet, my cigarette tobacco smushed all along my belly—it was AMAZING! I was so sore the next day from being crushed! And oh, yeah, the music was great! Van Halen was the headliner—I was still in that phase. ( -:

Least favorite concert?
Alexis: ?
John: I had free tickets to see Rufus Wainwright about 7 years ago. He’s clearly very talented. It just wasn’t my thing. I gave it a shot!
Abhi: I saw Tool in December at the PPG arena. Tool were fantastic of course, but the opening band, honestly, were garbage. They were terrible and we were seated high up from a weird angle with the worst view. Plus, it was a seated concert, which again, makes no sense!
Ginger: Robert Palmer didn’t say one word to the audience during his show in Austin. May he RIP.

Favorite thoughts, experiences about Pittsburgh?
Alexis: Love the fact that it is very raw and underdeveloped compared to other cities like Austin, TX where the music scene is fading due to high cost of living and commercialism.
John: Coming to Pittsburgh from Boston two years ago, it’s clear that the scene is smaller, but it’s more tight-knit. More people know each other and there is a sense of camaraderie between musicians.
Abhi: Pittsburgh was my first home after coming to the US for the first time ever, so it’s very special to me. The metal scene here is great, especially for prog rock and djent! Bands that I’d have to wait for years to do an India tour just casually gig in pubs here every couple of months! It’s a great place to live, Plus the Thai food is to die for!
Ginger: I really like all the free outdoor concerts and festivals in the summer. It really builds a sense of community.

Thanks, all. It’s really comforting to know that you are still able to work on music through all of this. Looking forward to hearing the next single “Shoes” soon!