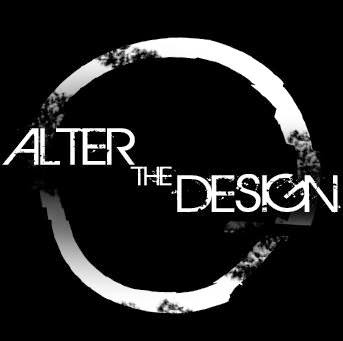 “Alter The Design is an independent American post-grunge band formed in Pittsburgh, PA from a culmination of well known local musicians. The band was founded by JJ, Roman, and Mark in late 2013, a year after their prior project Until We Wake disbanded. In the process of writing new material they auditioned drummers and invited Amanda, formerly of Mushcup, to join. However, after a couple of months, Mark decided to part ways due to creative differences. At this time he was replaced by Craig who worked with JJ previously in Besides Reason as well as owned the website The Pittsburgh Scene. They have since been gaining recognition for their impressive live shows and are looking to enter the studio in the near future.”

Alter The Design is a new-ish Pittsburgh band who are convening in the studio this very week to produce music for their upcoming debut. Their next gig the annual Holiday blowout The Abominable Snowjam 2 at the Hard Rock Cafe on December 19th. As we wait, I want to thank Justin Joseph Gaughan (Rhythm Guitar/Vocals), Amanda Sprowls (Drums), Roman Prokopenko (Bass), and Craig Anderson (Guitar) for taking the time to participate in this edition of First/Last.

cover logo on the back!

Amanda Sprowls: Green Day “Dookie”. Craig Anderson: “Queen Live”, I think it was on cassette. I bought it when I was ten years old. I was pretty lucky growing up because my dad had a pretty good music collection that I borrowed from pretty frequently.

JJ: Chevelle “La Gargola” but I need to eventually buy the “StarSet Transmissions” CD, heard of some of it on their online websites and the material is great!

JJ: This is impossible to answer, there are so many great albums. I am not sure I have a favorite. I love oldies, 80’s rock, classical rock, grunge, post hardcore, hard rock, the list goes on and on. So many genres, so many unique voices, and great songs that stick with you forever.

Craig: I don’t really have one, it changes on a weekly basis I think. I have the attention span of a goldfish.

Amanda: Metalica “Load”… I got to know Metallica in the Black album and the previous ones “Kill ‘em All”, “Ride the Lightning”, “Master of Puppets”, & “Justice For All” so I was eager and then ‘Until It Sleeps’ debuted and was like WTF!!!!!

Craig: Any album where you can tell that label pressures have affected how a band writes music.

JJ: My first concert I attended wasn’t a real concert, it was in someone’s back yard and it was for Light Up Night, and McGruff the Crime Dog was there, and Pittsburgh’s Halo Effect was playing, and my little kid band was part of it… I loved Halo Effect, they had a lot of inspiration from The Cure and their band really made me want to play music and in a lot of ways taught me and I think they had the same effect on the entire neighborhood at the time. I owe M’liss and Michael, and the rest of that long but not forgotten group so much! Amanda: It was Bon Jovi and it kicked ass I wanted to play drums after the concert.

Craig: Styx/Kansas with my parents, I think I was 7 or 8. It was thunder storming at Starlake, lightning was coming down everywhere around us and I was pretty sure we were all going to die. For a few years I hated concerts, but attending concerts is probably my favorite thing to do (as long as there’s no lightning).

JJ: Chevelle, they were so good!

Craig: I guess our own, before that probably someone locally.

JJ: Chevelle and Breaking Benjamin concerts, those have been my favorites for several years now, but there are many others I’ve got to enjoy. Tool, Godsmack, Korn, Silverchair (Australian band) – this was definitely a favorite I got to meet Daniel Johns, and even The Monkees – they were awesome! There are many more, this is another one of those really impossible questions!

Craig: Judas Priest, Motorhead, Heaven and Hell at Post-Gazette Pavilion a few years ago. Those guys could still rock as well as any young band, and I was glad that I got to see Ronnie James Dio live before he passed away. He really owned that show.

JJ: I have this nightmare of playing in a concert where everyone plays too fast, and the sound is not right, and it’s really hard to sing or connect with the crowd and I’m afraid to look at them or even move away from my microphone on stage as if it were an invisibility cloak… oh wait, that might have happened. That would have been it, ya that was definitely it.

Roman: Still to come, I have a feeling.

Craig: If I have a least favorite, I think I’ve intentionally erased it from memory.

JJ: Oh I love so much about Pittsburgh, but my favorite experience here was having my daughter! Nothing tops that, but those Pastrami Primanti Brothers sandwiches aren’t too far from it! Ha-ha, just playing.

Craig: It’s hard to narrow it down, there have just been so many. Pittsburgh is home and I’m really proud to call it that.

Thanks, guys. Really looking forward to hear what you all are cooking up!