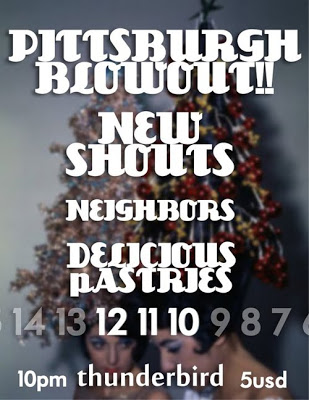 Tomorrow night there’s going to be a super cool retro indie band spectacular at the Thunderbird. Sharing a bill will be Delicious Pastries, New Shouts and Neighbours. Neighbours is a relatively new band on the local scene and the group’s drummer Andy Mulkerin was cool enough to participate in this ‘throwback’ edition of First/Last.

I remember having cassingles of a few things — a Roxette song, I think, and a couple Nirvana singles — but for whatever reason, I remember the first album I bought on CD for myself being John Mellencamp’s Human Wheels. What a bad album.

I end up getting a lot of albums for free because of my job writing about music … I didn’t buy it but I think maybe the most recent album I’ve gotten and given a lot of attention to was Sharon Van Etten’s new “Epic.” That was a pretty dick-sounding answer, eh?

Of ALL TIME? There are so many bad albums out there, and I hear so many, it’s hard to pick one! I might say that I was really disappointed by the Retribution Gospel Choir album that was released earlier this year, not because it’s an irredeemably bad record but because it has two songs that are absolute gems, then a bunch of stuff that’s forgettable and a couple tracks that are downright bad. And because it’s the best-sounding album I heard this year — the best production. Seeing the potential for that band — and I respect Alan Sparhawk and think he’s great — then hearing what most of the tracks sound like is pretty disappointing.

Bo Diddley at the rib cook-off at South Park when I was four or five.

Well, we played with Mermaids and Clovers a couple weeks ago at Gooski’s. The last show I attended but didn’t play was Scott Simons and Justin Andrew Band at Club Cafe.

Seeing Q and Not U in a basement in Oakland in 2002 was pretty incredible for me. Another game-changer was Rhys Chatham, Jonathan Kane and Tony Conrad at the Warhol in 2006 or so.

The Black Crowes and the Levon Helm Band at the Trib Amphitheater in 2009. I loved the Black Crowes growing up, and I like their studio output to this day, but the 10-minute guitar solo, jam-band stuff is totally not my bag. Levon Helm Band was decent but poor Levon (who’s a throat cancer survivor) was sidelined with laryngitis, so he couldn’t sing. The highlight was a version of “The Weight” they did with Chris Robinson singing — I guess I’m glad I caught that, but the Crowes’ set was insufferable (as was the crowd).

The thing I like best about Pittsburgh as far as music goes is, I think, the fact that no matter what “scene” you look at, everyone’s very concerned about helping one another: promoting one another’s work, being friends with one another, doing benefit shows when someone’s in need. It’s not a cutthroat thing where there’s a lot of competition between bands; there are cliques, sure, and people from disparate ends of the scene don’t always see eye-to-eye, but usually on a human level people get along really well.

Thanks a bunch Andy. CASSINGLES! I totally thought they were such an environmental waste! Good riddance. Looking forward to seeing you tomorrow bud.