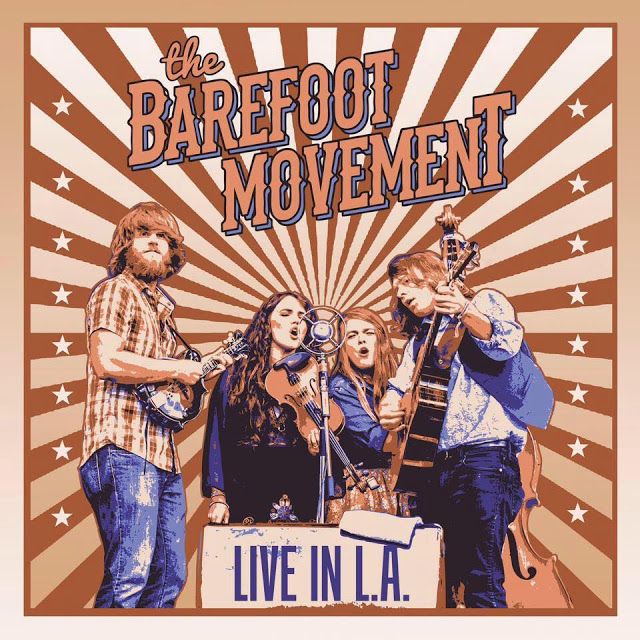 “Crowding around a single microphone, their show is as fun to watch as it is to hear, and often begs the question, how has no one lost an eye from a collision with the fiddle bow? The smiles on the faces of the band are obvious displays of the joy and excitement they feel when performing and the audience shares in the fun. With effortlessly executed transitions, the pacing between the softer and more vigorous numbers constantly has fans on the edge of their seats.”

The Barefoot Movement is an Americana acoustic trio from Nashville, TN who are in the midst of a tour that brings them to Pittsburgh this Thursday (4/14) at the Thunderbird Cafe with blog friends Charlie Hustle & The Grifters. You can get a preview of their soon to be released album Live in L.A which will be available next month. I want to thank Noah Wall (Fiddle/Vocals) for taking the time to participate in this edition of First/Last.

The first one I can remember purchasing on my own was Jewel’s Pieces of You. I had parents who were big music lovers though, so it seemed like there were always new records around.

I got a bunch of stuff for Christmas. Funk #49 by the James Gang. A few film score soundtracks like Jaws, Jurassic Park, and Silverado. And I think some Ozzy Osbourne. I have wide ranging musical interests!

Oh boy, such a hard question. I would have to go with Pink Floyd’s The Wall, only because it affected me so much and I come back to it all the time. I feel like I would say something else if you asked me on a different day! But this is a great one, every day, so I guess it’s a good choice.

I think I was about a year old and my folks took me to see the bluegrass greats The Seldom Scene. But the first one I remember is Hootie and the Blowfish when I was in the second grade!

We always get to see concerts on the road, if we’re opening for someone, or they’re opening for us. Or we play a festival and we get to check out some of the other acts. And even when we’re home, I have so many friends in the industry, it’s not quite as much of an event as it would be for someone who only sees live shows once in a while. I think the last one I saw was an Easter celebration featuring a bunch of musician friends of mine and with David Archuleta and Nathan Pacheco headlining.

Before that, I saw my amazingly talented friend Ed Snodderly, who produced The Barefoot Movement’s first record, at the Station Inn in Nashville. And before that I saw The Preservation Hall Jazz Band at their home venue in New Orleans. That was such an awesome show. Hands down, one of my favorite musical experiences ever as a spectator.

I think it’s hard to beat when I saw Roger Waters “The Wall” because it’s obviously one of my favorite records but it also was an amazing production. It’s really fun to see your all time heroes like that. It’s so worth it to go while you have the chance. I got to see the Eagles up close last year, and that was an amazing show. I’m so happy I got that opportunity since
Glenn Frey passed away this year. I also think there’s something special about seeing your favorite current artist when they’re at the height of their popularity. Don’t laugh, but I saw Limp Bizkit from the seventh row when I was in the sixth grade. I was absolutely obsessed with them. They were my “boy-band.” I was with my Mom and and my siblings and it was one of the most fun, memorable nights of my life.

Probably one of ours! Seriously though, I don’t remember bad shows, same as records. They must be blocked from my brain through some kind of coping mechanism. Thank goodness.

I have fond memories of Pittsburgh. We’ve had some days off there from time to time, and we’ve gotten the chance to see some of the sights like the Warhol Museum and that football stadium that was blown up in Batman! We’ve had our share of pierogies and we’ve eaten at the original Primanti Brothers! We can’t wait to come back.

Thanks, Noah. I have to agree with you on The Wall. Such a formative album in my youth as well. I am certain you heard the bluegrass version from Luther Wright & The Wrongs.