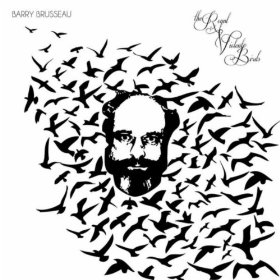 “Portland, Oregon-based singer-songwriter Barry Brusseau is celebrating the release of his sophomore full-length, The Royal Violent Birds, on Gorbie International Records. The album, available on vinyl and via digital retailers, finds the singer-songwriter creating at times lush, other times stark indie-folk music that is a complete one-eighty from his punk-rock days. It’s been said many times, “it’s not the destination, it’s the journey,” and nothing could be truer for Brusseau. He spent twenty years playing everything from metal to hardcore punk, with fifteen of those years spent touring in the pop-punk band The Jimmies, who signed to Lookout! Records before eventually disbanding. However, that journey lead to Brusseau’s complete one-eighty with the release of his debut solo album, A Night Goes Through, released exclusively on vinyl and digitally. Following it up with an EP on CD with handmade packaging, Brusseau is ready to return with his sophomore full-length, the stark, folk-based Royal Violent Birds.”

Check out Barry’s latest album, “The Royal Violent Birds“. My sincere thanks to him for taking a few to participate in this edition of First/Last.

Thanks, Barry. There’s nothing I appreciate more when a musician takes a unique DIY approach the packaging/album art to their music. So very cool.