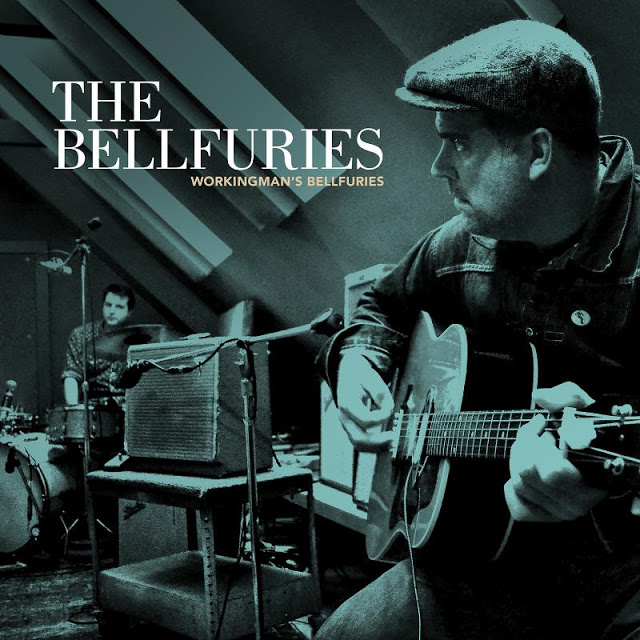 “From their adopted, boom-town home of Austin, TX, The Bellfuries are constantly within earshot of the latest catchphrase. New brands are always within their peripheral view. Well and good, vocalist and chief songwriter Joey Simeone says. “But we’re a rock and roll band. People are obsessed with categories, sub-genres. We check into a hotel, and the guy or girl behind the desk asks what kind of music we play. ‘Rock and roll.’ Then they ask what I mean by that. Well… “…Let’s see. There’s elements of country music, rhythm and blues. There’s some improvisation on stage that I guess you could say is jazz-inspired. Throw in some gospel…plenty of melodies coming out of older pop tunes. That adds up to rock and roll, last time I checked. If we’re not re-inventing the wheel, I’d rather get to work than worry about renaming it.” Simeone takes a no-nonsense, workingman’s line, and “Workingman’s Bellfuries,” (Hi-Style, Aug. 18) holds that line firm. No doubt, the armchair taxonomist will find plenty of variety. Lead track and single “Loving Arms,” is foot-stomping rockabilly-pop, a la Hamburg-era John Lennon. “Bad Seed Sown” brings finger-popping jive from the Dion school. “Make the Mystery No More” is Phil Spector 2.0, with some Everly Brothers harmony sitting at the top. And “Why Do You Haunt Me” is a shimmering track that suggests nothing so much as Elvis Presley’s operatic pop approach of the 1960s.”

The Bellfuries is a rock and roll band from Austin, TX who’s latest album, “Workingman’s Bellfuries” will certainly be on display as the band hits Pittsburgh Monday (9/28) at Pittsburgh Winery on a bill with Jessica Lee Wilkes. I want to thank frontman Joey Simeone (Guitar/Vocals) for taking the time to participate in this edition of First/Last.

“Shaved Fish” by John Lennon. I was about 5 yrs old. Around that same time, my brother gave me his Beatles albums, all the ones that I had been abusing over the past few years! He went and bought new ones. I felt like the king of the world. My earliest memories of life are Beatles-related. My brother Anthony, my Uncle Louie, and I would go to Beatles conventions in Cleveland (where I grew up) and for me it was like going to Willy Wonka Land. Screw the candy, give me The Beatles!

I haven’t had a turntable for quite a few years, but my fiancé brought home a cheap little Crosley suitcase the other day, so now I wanna go out and buy all this vinyl. Last one I bought was “Beast On My Back” by Crumbsuckers. They re-issued it on yellow vinyl and the re-master sounds fantastic. There are enough great riffs on that record to kill Jason Voorhees. It’s number three on my all-time fave metal records list:

Impossible to answer, but in a gun-to-the head-choose-or-die scenario I’d probably say “A Hard Days Night” by The Beatles. To my ears, there is an excitement and energy to that record that rivals any album ever recorded. Chiiingggg… “It’s been a Hard Day’s Night”… That opening chord is a stick of dynamite, I mean the damn album just started, one f***ing chord, and forget it brother, you are toast! REM’s “Murmur” is way up there for me, The Smiths’ “The Queen is Dead”, Ron Sexsmith’s “Other Songs”, Dead Kennedys’ “Fresh Fruit For Rotting Vegetables”, The Ramones first record, Misfits’ “Static Age”. Dammit, I can’t pick just one!

Any rockabilly album that has nothing new or interesting to offer. Buy an orange Gretsch, slick your hair back, and put out a crap record. I think everybody has about had it with garbage roots music in general. This is in no way coming from a place of arrogance, because god knows I am VERY critical of my own songs. I am constantly trying to reach the songwriting peaks that my heroes reached, I may never get there, but I will die trying. There’s room to be very creative, to be polished, to be raw, to bring your own story to the rockabilly table, but it has to have soul. Going to see a band that puts style before substance is, quite frankly, insulting to me.

Can’t remember. My mom took me to see Neil Diamond when I was a kid, maybe that’s the first one. I saw a lot of great punk and metal shows when I was a teenager, too. My dad would drop me and my friends off at the shows. I got to see Black Flag, Slayer, GBH, and a ton of other bands in very small clubs. It seemed every week there was a great band coming through Cleveland. It was an amazing time to be a teenager and to be into punk and metal.

Saw The Ugly Beats at a club here in Austin. Always a great show.

Favorite concert ever?
Too many to choose from. Ron Sexsmith at Wilberts in the mid-90’s. They Might Be Giants at Peabody’s, Paul McCartney at Frank Erwin Center, all The Ramones shows I got to see in Cleveland, Metallica on “Ride The Lightning tour” in ’85. Daniel Francis Doyle at any club here in town!
Least favorite concert?

Well, I’ve been a Steelers fan my whole life, and that ain’t easy being from Cleveland. I also think that you guys have the best baseball park in the country. I don’t think The Bellfuries have ever played there. It’s such a beautiful city, and we are really looking forward to tearing it up!

Thanks, Joey. A Steelers fan in Cleveland must have been messed up. Sports rivalries are so awkward to me.