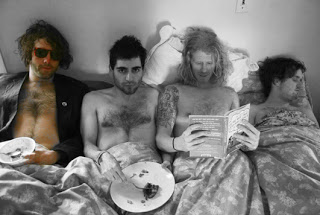 “BIRDHAND is a rock n’ roll band from Santa Cruz, CA that formed in late 2010. Within a year, the group caught the attention of Bad Brains’ bassist, Darryl Jenifer. BIRDHAND went on to record a debut EP, which was produced by Jenifer and since, has shared stages with bands such as Bad Brains, Baths, Memoryhouse, Soft Pack, Judgment Day, and Bear Hands.”

They are playing The Smiling Moose in Pittsburgh this Monday, March 19. You can snag tickets here. Bassist Mason ‘Spaceman’ Rothschild was cool enough to participate in this edition of First/Last.

Thanks Space. The Moose is actually becoming a cool-ass place to play. And coincidentally, it’s on the same street as Hookah Bookah! You score!