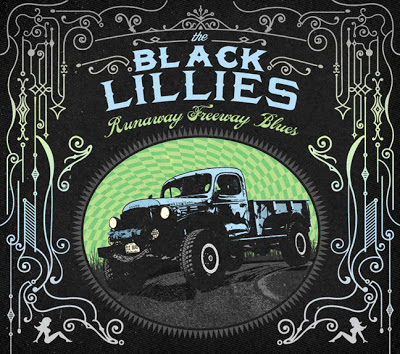 “Born in the rumbling cab of a stone truck and aged in the oak of Tennessee’s smoky night haunts, The Black Lillies have quickly risen to the forefront of the Americana scene. Founded by multi-instrumentalist and vocalist Cruz Contreras (co-founder of Robinella and the CCstringband), The Black Lillies have created their own unique brand of country, roots, rock and blues via Appalachia. The group, formed in 2008, also includes electric guitar and pedal steel whiz Tom Pryor and drummer Jamie Cook, both formerly of the everybodyfields, bassist Robert Richards, and vocalist Trisha Gene Brady. The Black Lillies continue to tour non-stop, and without a doubt, they’ll soon be appearing in a town near you. That’s a relative term, of course, but trust us on this – they’re worth the drive, however far it is, because you’ll leave feeling like you’ve witnessed an old-fashion Southern tent revival. These songs will haunt your thoughts long after the curtain closes, rattling through your head like a crooked screen door slaps against its frame when a storm is coming.”

Check out the band at their official Website, Facebook, MySpace, Twitter and YouTube. They hit Pittsburgh this Thursday touring behind their latest release, “Runaway Freeway Blues“. My thanks to Cruz Contreras (Guitar/Vocals) for taking the time to participate in this edition for First/Last.