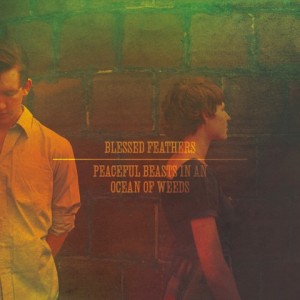 “West Bend is a Southeast Wisconsin town where the Milwaukee River shifts directions, angling to suddenly head West. It’s also the home of Blessed Feathers, a duo that initiated when Donivan Berube’s life similarly altered course. Hailing from Lakeland, Florida, Berube was raised as a Jehovah’s Witness, teaching himself guitar and recording songs in his bedroom. He left home at 17, disassociating himself from the church and driving 36 hours from the Florida sunshine into a Wisconsin blizzard. Berube found work in a restaurant in West Bend where he met Jacquelyn Beaupre, who is now his partner in both music and life.”

The duo return to Pittsburgh this Sunday at Howler’s on a bill with Way Yes and Andre Costello & The Cool Minors supporting their fantastic, just released, “Peaceful Beasts in an Ocean of Weeds“. My thanks to them for taking some time to participate in this edition of First/Last.

Thanks, guys. For the record, I love Greatest Hits. Getting a sampling of an artists work acts a primer of sorts for me. You like it, get more. You don’t, move on.