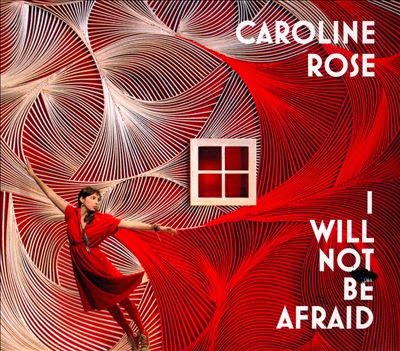 “A self-proclaimed “failed scholar and modern-day hobo,” 24 year-old Caroline Rose has broken her long string of short circuits with a live-wire national debut, I Will Not Be Afraid (August 19th / Little Hi! Records) that draws on her roots in rockabilly, vintage country, and blues to capture her unique and distinctive vision. Written and arranged by Rose and co-produced with multi-instrumentalist Jer Coons (with Pat Melvin on bass), I Will Not Be Afraid chronicles Caroline’s wandering years; a disillusioned youth constantly demanding freedom and the most from life. Raised in the Northeast (and currently living in her van), Rose is a rare mix of Northern grit and Southern charm whose musical influences trace back to her family’s Southern roots, running deep into the heart of Mississippi. “You can hear my history in the music,” Rose says. “It’s a bit rough around the edges, a bit wild, but American music through and through.”

Caroline Rose is an alt-country siren from Burlington, VT who’s latest release is her debut full-length “I Will Not Be Afraid“. She returns to Pittsburgh tomorrow night (4/30) opening for Pokey LaFarge at The Rex and I want to thank her for taking the time to participate in this edition of First/Last.

It was either “Take Off Your Pants And Jacket” by Blink 182 or “Speak of The Devil” by Chris Isaak. That’s right I just outed myself as a Chris Isaak fan.

“Heroine” by Lorde. The EP was sooooooo goooooooooood, they just stacked it full of all the best songs and left the dregs for the LP…

And the Kids! With Taylor from Cricket Blue! (see several interviews below)

Ooooooooooooooo there has been a tie for a while now between Battles and Lake Street Dive. Both very different, but extremely satisfying live shows. I go to so many shows though, I am probably forgetting the billion times I’ve said something was my favorite concert ever.

I’m an ass hole but I got a gift to go to a Jason Mraz show at MSG and it was truly the worst experience of my life… So many neon butterflies… I’m still reeling from the trauma.

Thanks, Caroline. Clean? That is surprising. Wait till you step out of the show on Carson street tomorrow night. You might be changing your perception.