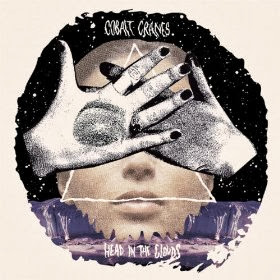 “Led by Kate Betuel and Tim Foley, Cobalt Cranes blend elements of grunge, psychedelic and shoegaze sounds into a sort of post-garage modern take on California rock. Since their 2010 EP In Media Rez, the band has been winning over critics at The Fader, LA Weekly, LA Record, Impose and more with male / female vocal layers, fuzzed out guitar, catchy bass lines and big drums. Their newest album, Head In The Clouds is heavily influenced by hard rock album narratives of the early 70s and versatile shoegaze rock of the early 90s. They also explored and expanded upon what is considered the “California sound.”

Check out the band at their official Website, Facebook, BandCamp and Twitter. The California duo will be playing Pittsburgh this Sunday at Howlers Coyote Cafe in support of their latest album, the fantastic “Head in the Clouds” along with Josh Berwanger, Diva 93, KMFD and Stranded Aliens. Many thanks to Tim Foley (Guitar/Vocals) and Kate Betuel (Bass/Vocals) for taking the time to participate in this edition of First/Last.