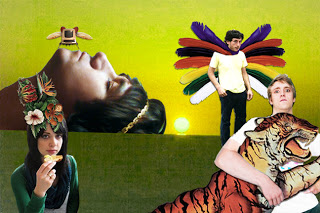 “The Color Bars started out as three mildly autistic doorknobs with nothing but a swimming pool full of pureed television sets and a petri dish full of bone cells from the spine of Joseph Stalin. After 4 or 6 years, they had grown into a 35 year old skydiving instruction business with a robust hazelnut aroma and sympathetic after-taste. Like a lot of bands, they set their sights on the frigid dunes of Lower Manchuria and quickly fell in love with themselves. Their fans, a disloyal and untrustworthy flock of methodone-dependent sandhill cranes, became a threat to the band’s virginity, and they had to resort to becoming mothers just to keep from rusting. Amazingly, despite all of their pups and hounds, they managed to carve out a distinctly obese sense of humidity in an increasingly dry and anorexic clam bar. Their story is that of the Hopi, the Souix, the Kennedys. It’s inspiring to think that even now, 12 decades after the dotcom bubble turned into a coming of age travel memoir, they’re still strangling themselves with licorice rope on pianos made of concrete and mormons. Something tells me these gals will be hiding out in Bea Arthur’s wardrobe for years to come!”

The band arrives in Pittsburgh tonight, Thursday, April 5 at The Rex with local favs Triggers, School of Athens and Paul Luc on the bill. You can get a taste of the band’s latest courtesy of Bandcamp here. Frontman Gerald Slavin was nice enough to participate in this ‘Opening Day’ edition of First/Last. 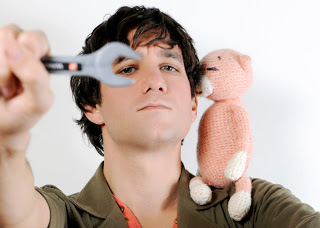 Guns and Roses’ ‘Appetite For Destruction’ on cassette. I remember being at Tower Records and strategically placing my thumb over the Parental Advisory Explicit Lyrics logo as my dad was paying for it.

King Sunny Ade and his African Beats. The album called ‘Juju Music’ on CD. So good.

That’s a tough one because it changes so often, but I’ll go with The Kinks’ ‘Arthur or The Decline and Fall of The British Empire’. It really has everything, both musically and lyrically; I never get tired of it.

That’s also a hard one. The first thing that comes to mind is Weezer’s ‘Make Believe’. I feel like I had given them the benefit of the doubt on ‘The Green Album’ and just kind of ignored ‘Maladroit’, but by the time ‘Make Believe’ came around, there was no more denying reality. I remember being in my car and abruptly ejecting the disc during the song “We Are All on Drugs.” So tragic.

Weird Al at The Westbury Music Fair with my cousin. We were both huge fans and had front row seats, so it was a huge honor to get sprayed with his fake blood as he hacked into his seemingly real left arm with a meat cleaver during the song “Since You’ve Been Gone.” Kind of creepy how well I remember that.

I don’t go to a ton of big shows really, which is sad because I certainly enjoy them. The last mid-to-big sized show I attended was The Books and Andrew Bird last summer as part of the Celebrate Brooklyn festival. I can’t remember if they played on the same night or not. In my memory they did…Both sets were fantastic. Those artists are real innovators in how they construct and execute their live performances. The Books incorporate video art into their music better than anyone I’ve ever seen and Andrew Bird has this surreal gramaphone contraption that he loops his voice and violins through and it’s really just incredible.

I got to see Pavement on their ‘Terror Twilight’ tour, which was their last tour as a functional band. I saw them at Bogarts in Cincinnati and they were really just explosively good at that point. There was so much force behind every song and so much creativity in the arrangements. Steve Malkmus seemed larger than life and the whole band just blew my mind. When I heard they broke up it made sense to me because I couldn’t see how a band could possibly get any better than that.

I’ve seen some pretty poor shows, lesser known acts and stuff, but since we seem to be talking about big names here, I saw Wilco at Roseland a few years back and was pretty disappointed. I love them, and I know they’re a great live band, but it seemed like an off-night for them or something because it was strangely dull and uninspired-feeling. Maybe they just weren’t in the right state of mind that night, which happens.

I have some very good friends who live in Pittsburgh and The Color Bars have always been well received when we’ve played here. The audiences here are really welcoming and genuine, so it’s always awesome to come through.

Thanks Gerald. Great night for music in Pittsburgh tonight!