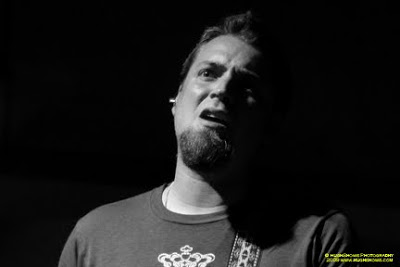 Here we go again. Three days, three giveaways! Pretty sweet. Thanks to Corey, I have a pair of tickets to give away to the band’s show on Sunday. This is no ordinary event. For the past year, Corey has been writing and recording a song every week and blogging the
. The concert is a celebration of the completion of the project. He’s invited some friends to partake and should be a surprising and amazing time. To enter, email me at hughshows@comcast.net with ‘Project 52’ in the subject line. Supply the name you want for the folks at will call the night of the show good for two passes.

Corey was cool enough to take some time out from his endeavors and participate in this edition of the ongoing love fest I call First/Last.

Man that hurts. I’d love to tell you it was something really cool, but it’s not. Now the first album I ever owned, that was Thriller, but that was given to me by my Mom’s co-worker who knew I was into music. It was a dubbed cassette. Early music piracy! No, my first album purchase was by 70’s and 80’s rock giants of the Christian Rock genre, Petra. The album was called “Beat the System” and looking back on it now was equal parts embarrassing and surprisingly good. The songwriting was great for what it was and the singer-dude could really wail. I was really young and most of my access to music at that time was the small-town pop radio station, so a lot of Duran Duran and Phil Collins, but a kid like me wasn’t ‘supposed’ to be buying secular music. That didn’t last long, and my family gradually distanced ourselves from that scene, but it was an influence none the less.

Last Saturday the Karl Hendricks Trio played a show with a great band from Denton, Tx called Tre Orsi. I bought their record Devices + Emblems. It’s really awesome, and I think they dropped a few off at Paul’s CD’s. They’re like a more rocked-out version of bands like Seam, The New Year, and Bedhead.

That’s probably a moving target and something I haven’t really had to think about. I don’t know. A couple that come to mind right off hand are Sebadoh’s Bakesale, Guided by Voices’ Under the Bushes Under the Stars, and Silkworm’s Libertine… and I could go on and on.

Again, from the top of my head, Pavement’s Terror Twilight, was a pretty big downer at the time.

Last one that I wasn’t playing was Yo La Tengo at Hartwood Acres. We took my 3 year old and he LOVED it. He was really into the concept of encores and now he and I will play Yo La Tengo concert where he’s Georgia and he plays his drum set and I’m Ira and I play guitar. We get through a minute and a half of “Tom Courtenay” and then he announces that we’re finished, waits for my wife to clap, and then we run to the kitchen to plot our encore… and so on. It’s awesome.

That’s another tough one. Back in the 90’s Hovland got to play a lot of really good shows, and I have great memories of playing with various local rock greats and some of my favorite touring bands of the time. One that comes right to mind, though I don’t know if I really appreciated how great of a show it was at the time, was getting to see the Karl Hendricks Trio, Hurl, and Silkworm all in one show at a place that used to be called Luciano’s in Uptown.

Eh, I don’t know. I got hit with a pretty heavy dose of electricity at an old sketchy gallery on the Southside to the point where it wasn’t fun at all.

Oh man, I don’t know. I love Pittsburgh. I’ve been here nearly 15 years, which is crazy to think about in itself. It’s the people and the neighborhoods, and so on… it’s all been said before. I’ve had both really great and not-so-great experiences with the music scene here. I’ve certainly made my share of mistakes. But I’ve gotten to meet and play with some amazing musicians who are also great people. The drummers in this town, man! I’m just glad to have been a part of it all and I look forward to getting back out and playing shows again. I hope more local folks get a chance to check out the blog and the song-a-week project. It’s pretty unique and it’s a lot of music, but I think the songs really stand on their own.

Thanks Corey. Cool story about your kid appreciating an encore! Train ’em while their young. Also, I am guessing your first show was New Kids On The Block??? Have fun on Sunday.