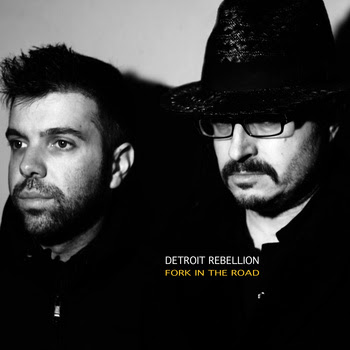 “The blues had a nice renaissance in 2012, with Jack White and The Black Keys bringing their unique takes on the storied genre to the masses. While some blues revivalists don’t like to get their hands too dirty, Detroit Rebellion are knee deep in the muck. Fork In the Road, their sophomore EP, is a testament to that integrity: a gritty, dust on the amps, stripped down love letter to the blues legends of the past (John Lee Hooker/Leadbelly), crossed with Detroit Rebellion’s own modern sensibilities and unique storytelling. Despite the name, Detroit Rebellion is actually a Providence, RI based duo composed of Jeff Toste (guitar/vocals) and Michael Lamantia Jr. (drums), aka Mikey Lams. Bringing the less is more approach to the combination of blues, folk, and “other” styles (with an emphasis on the “other”), Detroit Rebellion has been quickly capturing attention as a band to be reckoned with. In 2009, Toste began performing solo as Detroit Rebeillion, which he referred to as “a tribute to old school blues and Americana.” After Mikey Lams joined on drums, Toste found Detroit Rebellion “mutating into something else.” The two started recording right away, and Toste said, “It was clear that the sound was changing for the better.” During recording sessions, Toste experimented with “adding some texture to the songs” by running a distortion pedal through his guitar–a pedal he scored from Kurt Cobain at a Nirvana show in 1991. The result is layers of gritty riffs that make Fork in the Road a must for fans of uncompromising, straight-faced blues, rock and “other.”

Check out the band on BandCamp, Facebook and YouTube. The duo’s debut EP, “Fork in the Road”, drops this month and want to thank Jeff Toste (Vocals/Guitar) and Michael Lamantia Jr. (Drums) for taking the time to participate in this edition of First/Last.

Thanks, fellas. Love the EP. That Cobain distortion pedal definitely does the trick!