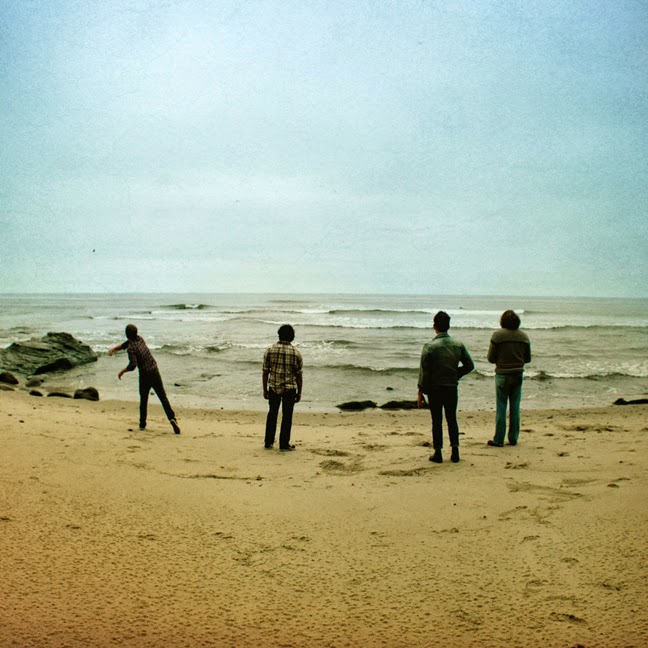 “California places a distinct sonic stamp upon the music born with in its boundaries. Owens had his Bakersfield, Parsons his Joshua Tree, and Malkmus his Stockton, and in their tunes you can hear dust, desert highways, and skateboards gliding over suburbia. The Donkeys have San Diego, and from that environment have woven a fundamental ease in their music – a rock, a roll, a sway, a slide – you could even call it a breeze. On Ride the Black Wave, The Donkeys continue their easy rolling, classic vibrations, but add a mystery and tension that make this record their most lyrically and instrumentally compelling.”

The San Diego quartet returns to Pittsburgh this Thursday at The Smiling Moose for the all-ages EARLY show in support of their latest album, “Ride the Black Wave“. I want to thank Tim DeNardo (Guitar/Bass/Vocals) for taking the time to participate in this edition of First/Last.

The first CD I vividly remember buying was Megadeth’s “Rust in Peace”. My dad talked me out of getting the tape because CD’s were better and I could just dub it. As far as vinyl is concerned our local record shop did a midnight sale where the proprietors would get drunk and price things however they saw fit. I remember the first time I shopped there was on one of those evenings and I left with Lync’s first album and Metalica’s “Kill ‘Em All”.

The last record I bought was the record store day William Onyeabor Remixes, Sensation’s Fix “Music is Painting in the Air”.

Holy shit. I don’t know if I can answer that. Albums that will always be in heavy rotation in my life though I can honestly say. David Bowie “Aladin Sane”, Brian Eno “Another Green World”…. there really are too many. So many moods and so many records to fit each mood. The two listed were the first that came to mind so I’ll leave them but there are hundreds that I could follow them with.

It’s hard to say. I’ve often been bummed on purchases but I never get rid of them and found that in a different context they were really good. I will say that most recently I was tricked into getting the new Haim record and I couldn’t have been further from the place required to enjoy that level of pop.

My sister got burned by one of her bitchy friends as a child and was uninvited to a George Michael concert she was feverishly looking forward to. In an act of solidarity my dad bought four front row tickets to said concert (way better than he lawn seats her friend had had) and took the whole family. So to answer that first concert George Michael “FAITH” tour.

The Thursday before Coachella, GOAT played a small desert venue in Pioneer Town. Wouldn’t have missed it for the world. It was so good.

The first thing that came to mind was Nine Inch Nails. I saw them as a kid for ‘Downward Spiral’ and was floored. There have been a lot of really good ones.

One of ours. I drank entirely too much before we played and was later described as seeming as though I was playing a different song the whole time. Not my proudest moment.

Love Pittsburgh. The first time we played there was with Magnolia Electric Co. at the Warhol Museum. I remember being stunned by the city as we drove out of that tunnel. Having not even known we were close, to arriving in the center of it like that was awesome. First impressions go a long way and that one has stuck with me. It was a great show. We got tires the next day and I picked up a shirt from a thrift store that I still wear frequently.

Thanks, Tim. Man, do I miss Jason and MECO. I was supposed to be at that Warhol show but a family emergency prevented that from happening. Unfortunately, that was his last show here in Pittsburgh.