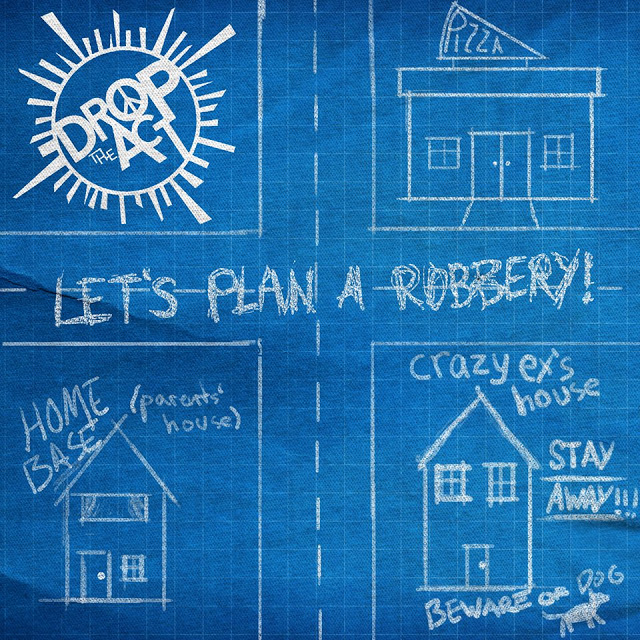 “Since coming together in 2012, the band has developed a unique style of kinetic lyricism, captivating melodies forged with authentic rock energy, and pop punk liveliness. Backed by their dedicated fan base upon which they have built their foundation, the band is quickly gaining ground and plans to make big moves in the very near future.”

Drop The Act is an alt-pop punk band from New Castle, PA. They recently released their debut album “Let’s Plan a Robbery!” and are in the running to play at this years Vans Warped Tour with your help. Just click the link to find out how. I want to thank Jacob Hoffman (Guitar) for taking the time to participate in this edition of First/Last.

The first album I bought with my own money was “Commit This To Memory” by Motion City Soundtrack. That album is a fantastic piece of art and if it wasn’t for that album, I would not have pursued playing music in the first place.

The last album I bought was “Sway” by Blue October. It is a very emotionally filled album and I find myself relating to their songs frequently. Their albums helped me get over some emotional turbulence I experienced when I was younger, and still helps me to this day. I’ve been a fan of them ever since I heard their album, “Foiled”, when it first came out. Since then I bought their whole discography and buy every CD that they release.

That is a tough one cause we love a lot of albums. However, if we had to choose an album, it would be “Infinity On High” by Fall Out Boy. It is such a fun album and we can never find it in ourselves to skip any track on that album. We got a lot of our inspiration from this album when we started writing songs. To this day this album reminds me of the summer when I first got the album and it always brings back fond memories. This album will always have a place in our hearts.

I will have to say “Lulu” by Metallica and Lou Reed. That album just was not good in our opinion.

It was a local concert. It was a local bands release show and I was absolutely blown away by it. It was one of the reasons I started playing in bands in the first place and inspired me to do the best I can when writing music.

I went to a State Champs / Set It Off concert and had a blast! It was truly an amazing concert and show of musicianship.

It was the Bowling for Soup / Patent Pending/ Freshman 15 tour a few years back. It was at Peabody’s in Cleveland. The bands and the crowd had a blast that night. Everyone had a good time and was singing their hearts out to every song.

It was a show we played in Columbus, Ohio. There was literally no one there besides the bands and the bartender. That was not what really bothered us though. The venue owners and promoter were very unprofessional and treated us the worst that we have ever been treated. It was a bad night for sure. We played our hearts out and made the best of it though.

I would have to say when we went to record the music video for ‘Friendzoned’. It was such a blast just recording the video and roaming the beautiful city while we did goofy things. It is such a lively city and we always have a good time when we are in the area. Pittsburgh is definitely one of my favorite cities in the world.

Thanks, Jacob. Good luck on the Battle of the Bands contest, man. I always love seeing young bands get the chance to play at fests like that.