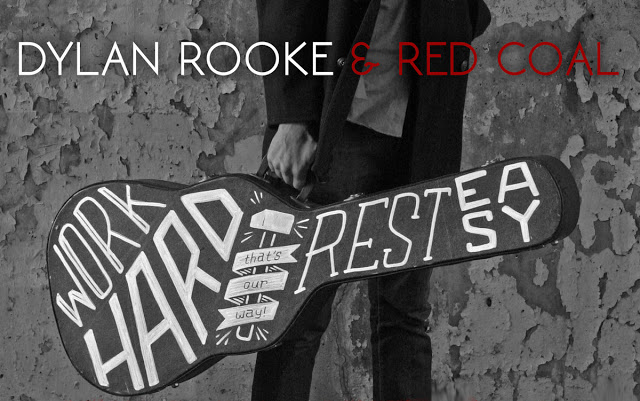 “Singer-songwriter Dylan Rooke experiments with the intersection of folk, rock, and some punk grit. Joining with some old friends who formed the accompanying band Red Coal, together they have overlaid vocal harmonies, modern electric and traditional acoustic instruments, to orchestrate a balance between the dynamics of their songs, bringing with them many anthems to be sung arm in arm.”

Dylan Rooke is an artist/songwriter from Pittsburgh who will be taking part tonight as part of this months Local 913 Live featuring performances by three recent WYEP Singer-Songwriter Competition winners. Along with Trinity Wiseman and Mike Meiers, Dylan will be playing this always all-ages/free event and if you happen to be over 21, you can enjoy a few adult beverages courtesy of Dos Equis. These are always very laid back, chill shows that are no brainers if you are like me and love to support the Pittsburgh music scene. I want to thank Dylan for taking the time to participate in this edition of First/Last.

Man, I want to say something real cool and sound legit, but I’m pretty sure it was an album called Bloom by Audio Adrenaline, a 90’s alt-rock Christian band – there ya have it folks.

Really loving Adios by Cory Branan that I just picked up last week.

Definitely one by the only band that matters, The Clash, but it’s so hard to pick which one – probably London Calling, is that cliche’?

Cut the Crap by The Clash, it didn’t cut it… such a painful way for them to go out (thankfully Joe came back with The Mescaleros to give us all some redemption!)

The Orange County Supertones, maybe the year was 1996? Oh man…

Cory Branan with Jared Hart and locals Tim Vitullo and Bryan McQuaid. It was such a solid night of singer-songwriters.

Probably the Bouncing Souls w/ Gaslight Anthem circa 2008. One of the most fun nights of live music I’ve ever been a part of.

Oh goodness, probably one I played when I used to tour in a punk band, there were a lot of bad ones we experienced…

That is also difficult, this town has so many stories it has invited me into. but in relation to music though I’d say every time I’d come back to town after I used to tour with my former band and I’d feel this well of joy as we came through a tunnel (usually) and see the skyline and I’d know I was back home, only to get the itch to leave town again in almost no time! I always thought I’d find some other place to settle down in our travels but by the time I was ready I knew there was nowhere else for me to put down my roots – they were already here. I’m happy to see where the music scene is going here, seems like there’s been a lot of people diggin’ in and supporting each other – I’ve certainly felt the love since getting back into music over the last 2 years after
a hiatus from my punk band days.

Thanks, Dylan. Seriously, bad stories from touring with a punk band? Dude, I would love to hear some of those….