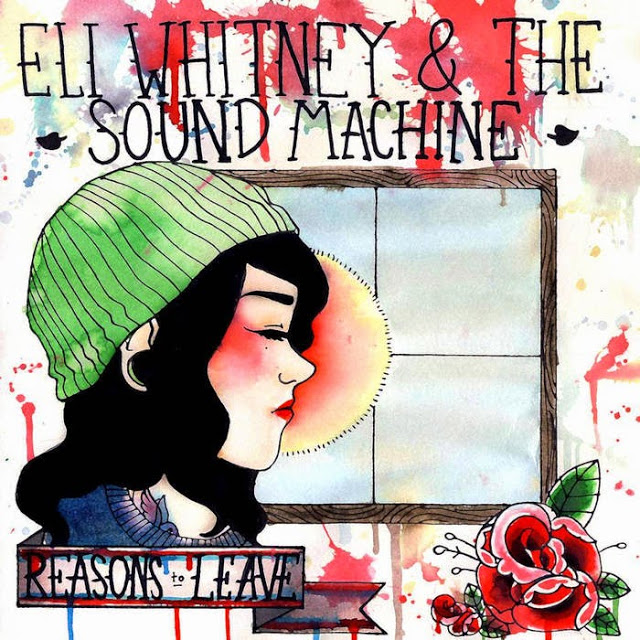 “With candid emotion, stylistic fluctuations, and perpetual energy, Eli Whitney & The Sound Machine are a slightly unhinged punk band based out of Brooklyn who simultaneously lament and celebrate life in transition on their newest record, “Reasons to Leave”. They are not interested in confines or reputations. They are extremely interested in being your new best friends.”

Eli Whitney & The Sound Machine is a post-ska-emo-‘whatever’ band from Brooklyn, NY who’s latest release from 2014 is entitled “Reason to Believe“. They are hitting Pittsburgh Tuesday night at The Smiling Moose for the early show with friends Freya Wilcox & The Howl. I want to thank Mike Vizzi (Guitar/Vocals) for taking the time to participate in this edition of First/Last.

I hope nobody is under the impression that I was ever cool, because the first two albums I ever asked my parents to buy me were the first two Smash Mouth albums. I never really needed to go out of my way to get my hands on music, since my dad was fairly cool in the nineties and already had “Dookie”, “Nevermind”, and “Smash” in addition to his massive stash of old rock records. I’m not sure what the first one I bought myself was, but I definitely picked up some scratched REM CDs from the used record shop in my hometown when I got my first paycheck.

I picked up The Smith Street Band’s “Throw Me In The River” LP when I saw them last month with Jeff Rosenstock, Andrew Jackson Jihad, and Chumped. I loved the record before this one and went into the show not knowing any of the new songs, but knowing full well that they would blow me away (again). Did you know they’re the best band in the world? I use that term pretty loosely, but they really are.

Against Me! are definitely my favorite band, and I usually say my favorite record of theirs is “As The Eternal Cowboy”, but recently I think “Searching for a Former Clarity” may have surpassed it for me. It’s hard for a band that popular to try new things and get away with it, but every record of theirs is a totally unique and intense experience in its own way. “Scrambles” by Bomb the Music Industry! and “Figure 8” by Elliott Smith are close behind, though.

I cringe pretty much any time an older artist tries to make a “comeback” record. I love a lot of old rock bands, and some of them do pull off new material that reflects growth and maturity, but it just bums me out when someone tries to act twenty (or forty) years younger than they actually are. I remember watching the Rolling Stones on Super Bowl halftime show in 2006, and when they played their “new single” I just remember thinking, “Who is this for? Who wants this?”

At some point in high school, my dad took me to see Blue Oyster Cult at Westbury Music Fair because I was obsessed with them at the time. Secret Treaties and their self-titled are among the most criminally underrated rock records of all time IMO. Weirdly enough, that wound up being Craig’s first concert too, though I don’t think we planned it.

Not counting shows I’ve played, that Smith Street Band show at the Warsaw in Brooklyn last month was the most recent one. I brought my 17 year old cousin, which was rad, because now that I’m in my mid-twenties, I’ve developed a nasty habit of getting tired and jaded, and I take for granted that I get to see incredible lineups of amazing bands literally all the time, but this is all fairly new to him, and so seeing him go nuts for a band like Andrew Jackson Jihad really reminds me of why I got into all of this in the first place, and that I’m really lucky to have punk rock in my life. The show was fantastic.

The best show I ever saw, hands down, was Saturday night of Fest 10, when Dillinger Four, Ted Leo, and Against Me! played back-to-back at the Florida Theater. My favorite show I’ve ever played though took place at Craig’s college house in New Paltz. Chewing on Tinfoil, an awesome ska-punk band from Ireland who had been nice enough to send me some free merch a few years earlier, needed an end-of-tour show. It was our old sax player’s birthday and we opened the show, then CoT proved to a drunk crowd of college kids in a crowded living room that they’re one of the best live bands on the planet. Our friends in Bizarro Me closed out the night… their second guitarist couldn’t make it, so Craig filled in, though I’m pretty sure I stole his guitar when they decided to cover ‘Fat Lip’ on the spot. CoT really need to come back to the States, I miss them.

Remember what I said about old bands pathetically trying to act young? I saw Metallica on the “Death Magnetic” tour. I really didn’t want to go, but the girl I was dating at the time had already bought us tickets… of course, we broke up about a week before the show and for some reason I went with her anyway, proceeding to have the most awkward non-date of my life against the backdrop of a truly disappointing performance from one of my favorite childhood bands.

This will be my first time in the city and I know nothing about it! Something about penguins, I think, or maybe bridges?

Thanks, Mike. Penguins and bridges. From an outsider’s POV, you pretty much summed up everything you need to know about our city. If you mentioned Warhol, you got the trifecta, buddy.