First/Last-Fist Fight in the Parking Lot 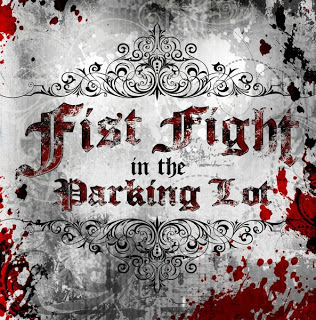 “Fist Fight in the Parking Lot Verb. if you can’t pronounce this one, we have problems

1. A song written by Fred Armisen for a skit from Saturday Night Live called ‘Band Reunion at the Wedding’ where Ashton Kutcher and Dave Grohl do a tribute to hardcore punk with their mock band Crisis of Conformity.
2. An Innervenus rock band formed in 2009 right here in the ‘burgh. A female fronted foursome, this band will rock your face off with their modern take on a vintage sound and captivate you with their stage charisma. Fist Fight in the Parking Lot is the type of band that you can take your girlfriend to see and she won’t be tearing at your hoodie to leave after the first song. Comprised of Jason Sichi, Johnnie McCallough, and Chris Ruane (MojoFilter, Venus in Furs) along with Abby Krizner (Motorpsychos), this band’s hard hitting sound is certain to catch in your ear like a fire to kindling. Their gritty, raw and moving sound has built an energetic, passionate following of fans all around Pittsburgh and into Ohio where they have actively played during the past year. The stage commands attention when they perform on it, and you will be enticed to keep listening. Come out and give a listen for yourself!”

The band is working on new music and plays Kopec’s tonight in support of this year’s self-titled debut. I want to thank Abby Krizner (Vocals/Guitar) and Chris ‘Ru-Dogg’ Ruane (Drums) for taking the time to participate in this edition of First/Last.

Thanks, guys. I wouldn’t know which would be worse Abby? Screaming tweens or listening to fun. Both together??? Nightmare for sure.