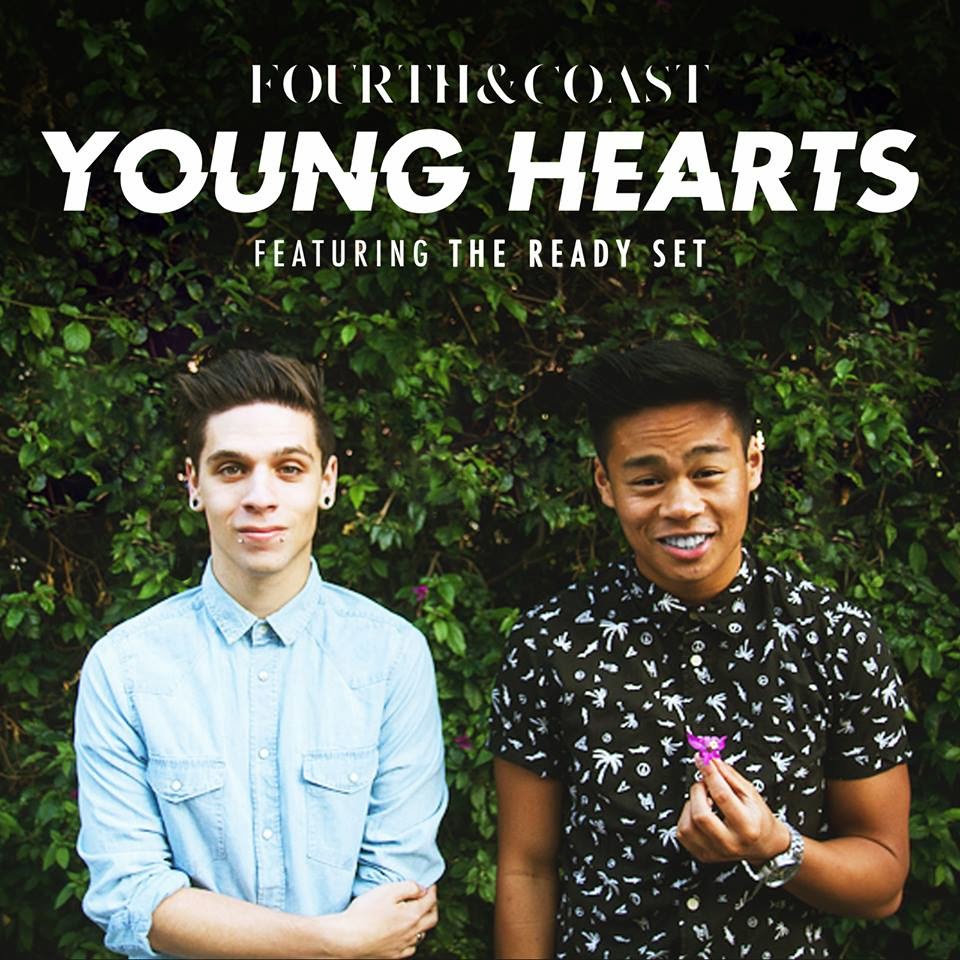 “Fourth & Coast consists of longtime friends Stephen Ordoñez and James Colla. The duo released several demos over the course of 2012, unveiling their debut EP, ‘Feels Like Summer’, produced by Colby Wedgeworth (The Maine, Lydia, This Century), in May 2013. They have toured with and opened for acts like Hollywood Ending, Paradise Fears, and Before You Exit, playing sold out shows at The Roxy, Chain Reaction, and Gramercy Theater, among others. Two of their songs, “Ain’t Got a Care in the World” and “Hopeless Romantic,” were featured on Hollister’s in store playlist in 2013, with over six months of combined store-play.”

The San Diego ‘pop-rock’ duo hit up Pittsburgh tomorrow at The Smiling Moose for the EARLY show behind their just released single, ‘Young Hearts‘ featuring The Ready Set. I want to thank James Colla (Guitar) and Stephen Ordonez (Guitar/Vocals) for taking the time to participate in this edition of First/Last.

James Colla: The first album I ever bought was actually the ‘LizzieMcGuire Movie Soundtrack’, and to this day it’s still incredible.

Stephen Ordonez: I actually bought three albums the first time I spent money on music! They were “OceanAvenue” by Yellowcard, “Catalyst” by New Found Glory, and “The Reason” by Hoobastank. I think I had some chore money lying around and wanted to immerse myself in a ton of music I had never heard of before. Best decision of my life.

James: The last album I picked up physically was “Millennium” by The Backstreet Boys. But digitally it was actually Cher Lloyd’s newest album.

Stephen: The last album I bought was Beyonce’s new album, “BEYONCE”. Not gonna lie, I never used to dig her music, but now it’s my not so guilty pleasure.

James: That’s so hard to pick! My high school years were spent listening to heavier music so I’d have to say “With Roots Above and Branches Below” by The Devil Wears Prada is one of my all-time favorites.

Stephen: This is really hard to answer because there are so many albums that I fall in love with for a short period of time. I’d have to say “The Way It Was” by Parachute has had the biggest and longest effect on me. Every song on that album is great and has so much emotion.

James: I can’t think of one album that really stands out but there are definitely times when some of my favorite bands release a new album that just doesn’t do it for me.

Stephen: This is tough! I guess if I had to choose I would say “Because the Internet” by Childish Gambino. I’m a big fan of everything Donald Glover does and was really looking forward to his latest album. There are some songs I love on the album, but in my opinion there were a lot of songs that didn’t catch my attention like some of his others do. Still love his work though!

James: I haven’t actually been to many concerts lately. Besides going to our shows/friends shows I think my last real show was Twenty One Pilots in Philadelphia.

Stephen: I went to a local show in San Diego last week at a random dive bar and really enjoyed it. There was a band there that sounded like The White Stripes whom I dig, and a band called The Wizards of Doom, ha-ha. Anyway, it was nice to see a random concert from people who seemed like they genuinely loved playing and performing.

James: Warped Tour back in the day is still one of my very favorite memories. I think it always will be.

Stephen: I saw Bruno Mars last summer for the first time and he was phenomenal. He’s definitely a singer I look up to and he’s even better live than he is on his records – something I never thought was possible.

James: I’ve gotten lucky enough to where I generally have only been to shows I’ve enjoyed. I think I’m just extremely picky and want to be convinced that I will enjoy it before I come out.

Stephen: I honestly don’t remember a concert that I’ve absolutely hated. The closest thing I remember is going to a Hellogoodbye concert with my crush freshman year of high school and wanting to kiss her the entire time but never did. The whole time there I was really nervous and forgot to enjoy the show ha-ha. I blew it.

James: We played a sold out show here in August of last year and it was amazing. There was a Dairy Queen right next to the venue too so I’m always down for that.

Stephen: We’ve played Pittsburgh twice and both have been amazing experiences. Last time we played, I remember having to walk through a sold out crowd to get to the stage. It was interesting to say the least. It was like “Hey, um, pardon me. Forget the epic intro and I hope you enjoy the show.”

Thanks, fellas. Cool that you have positive Pittsburgh memories. BTW James, I worked for years at Diary Queen. Probably not that one, though.