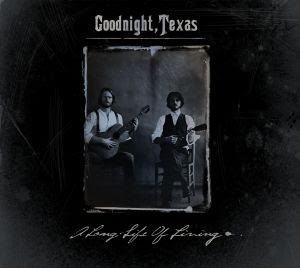 “Goodnight, Texas got a post office in 1888. Some time later, Patrick Dyer Wolf and Avi Vinocur came across each other out in San Francisco and took to learning each other’s melodies. Young Avi came from people with deep roots in the skinny part of Maryland. Young Patrick was out west to seek thrills but after a year or two he went east to find fortune and love in the Carolinas. Before he left, they put some songs to tape, and kept in touch. They met again on the east coast and then the west coast, picking up steam and band members. They played in earnest. “A Long Life of Living” is the product of their travels, their whispers and roars, their sounds made with steel and wood, and the echo of our country’s past and the town of Goodnight, exactly halfway between their current residences (if you take I-40.)”

Check the band out at their official Website, Facebook, Twitter, YouTube, SoundCloud and Spotify. The band hits Pittsburgh on Wednesday behind their fantastic debut release, “A Long Life of Living“. I want to thank Patrick Dyer Wolf (Guitar/Banjo/Mandolin/Vocals), Avi Vinocur (Guitar/Banjo/Mandolin/Vocals), Scott Griffin Padden (Bass) and Alex Nash (Drums) for taking the time to participate in this edition of First/Last.