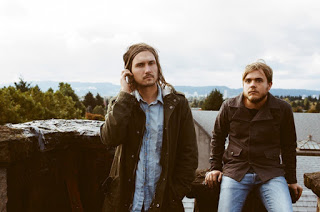 “Listening to Greylag’s debut EP, The Only Way To Kill You, one can almost hear the relief pouring out of Andrew Stonestreet and Daniel Dixon’s gentle, lilting harmonies and spare, acoustic guitar murmurs. Although new on paper, the Portland, Oregon-based band is the product of a multi-year, cross-country journey of friendship, emotional trial and self-refinement that while finally complete, is really only just beginning. In the past year, Greylag has worked at developing their home base in the Pacific Northwest, reaching sell-out status in their home town of Portland along with recent tours through the western US and Canada. This last fall, Greylag was part of the Gomez and Kopecky Family Band tour and is expected to support a few high profile tours in the first part of 2012. Greylag’s Debut EP, The Only Way To Kill You, is due for release on Ninth Street Opus Records in May 2012.”

The band bring their music to Smalls this Friday opening for Augustana. Andrew and Daniel were nice enough to participate in this edition of First/Last.

Thanks fellas. Can’t wait to hear the full EP.