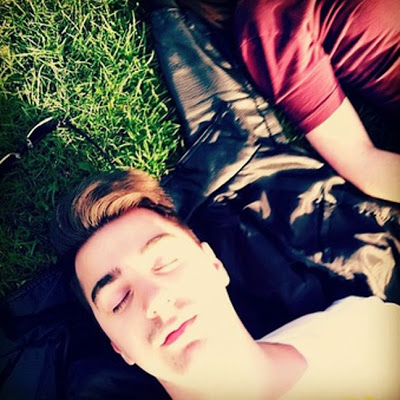 “In 2007 I was diagnosed with General Anxiety Disorder and Depression. I was transitioning into college life and not really handling that transition very well. Also at this time my first true long-term relationship had ended and I was left feeling very empty and sad. In my free time I would play guitar and try and write songs but without having the intent to share them with anyone. In 2009 while still learning how to cope with depression and anxiety one of my best friends tragically passed away. It was the most difficult period of my entire life. I didn’t pick up my guitar for a long time after that. After many months of coming to terms with my friend no longer being with me as well as a few failed relationships I finally began to start picking up my guitar and found it very therapeutic to write about all the sad and more difficult things in life. I came up with the title for this music project, Heavy Hearts Will Anchor, with the notion that the songs I write would be a way for me to deal with my depression and that by singing about them it would help me come to terms with them and help my heart to maybe not be so heavy.
I recorded my first (and only) EP in 2010 with the help of a college friend and my Audio Production Class’s studio. The EP was a concept album about a man dealing with the loss of a friend, his struggle with his faith, and his ultimate decision to go out to sea and leave all his loved ones behind. Since then I’ve continued writing songs about a myriad of topics around relationships, depression, religion, friends, death, and most recently my first and only love song. This year I have began doing recording sessions with my dear friend and fellow musician Ryan Walker and will probably continue to release those recordings through my bandcamp as I write them. Although Heavy Hearts Will Anchor is never gonna have a record deal or be my main source of income I think I’ll always continue to write music as long as I can still sing and hold a guitar.”

Check out the band on Facebook, Tumblr, ReverbNation, SoundCloud and BandCamp. HHWA is the moniker for songwriter Christian Freeberg. He is originally from Indiana, PA but now resides in Lawrenceville and is quietly putting out some beautifully understated music. His latest single, ‘Little Sticks‘ was released a few weeks ago and I really want to thank Christian for taking the time to participate in this edition of First/Last.

Thanks, Christian. I love your last bio line, man. Making music for the love of it and not the record deal. That’s what it’s all about.