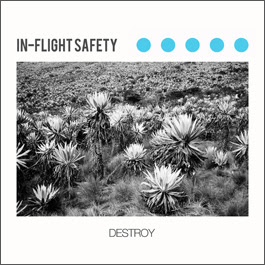 In-Flight Safety is happily based in Halifax, NS, Canada. The band formed in the small town of Sackville, NB, during the twilight of their undergrad degrees. They studied fine art, computer sciences, geography, commerce and classics by day and toiled over music on the evenings and weekends. The band, now lead by John Mullane and Glen Nicholson, are putting the finishing touches on their latest record due out in 2013.”

Check out the band at their official Website, Facebook, Twitter, YouTube, BandCamp and SoundCloud. The band have recently released the teaser single, ‘Destroy‘, from their upcoming album. I want to thank John Mullane (Guitar/Vocals) for taking a few minutes to participate in this edition of First/Last.

It was most definitely the late ‘80s and it was most definitely some form of rap. I can recall being very young and desperately wanting Salt n’ Pepa’s ‘Push It’. My mom ended up buying me the vinyl 45 rpm single of it. I spun it and spun it like mad. And I danced to it with friends while eating popcorn and wearing jogging pants. I still love that track. I know the rap bit in the middle of song as well as I know any Smashing Pumpkins riff. Likely the first full tape I bought was probably something by Fresh Prince and DJ Jazzy Jeff or Maestro Fresh Wes’s first album.

Favourite album of all time?

I don’t really have a favourite album of all time. I have never been a ‘favourite album of all time’ kind of person. In fact, there are very, very few artists whose entire catalogue I would entirely abide by. I find this question really difficult to answer. If I am lucky I can find two or three albums every year that truly attach to my person and hang on there for months. As of late, I have been absolutely blown away by the Wild Nothing record “Nocturne”. But to long-windedly answer your question, because of what it represents in my musical journey “OK Computer” would be a fitting answer.

My least favourite album is probably something by Papa Roach or maybe Insane Clown Posse? Did I just put my life in danger by saying this!? P.S. I do find the Juggalo thing really fascinating and interesting.

Barenaked Ladies on their ‘Gordon’ tour in 1993.

I attend quite a few shows per month locally, but the last bigger show I attended was Divine Fits at SxSW 2013.

As of late it was M83 on the ‘Hurry Up We’re Dreaming’ tour. Saw them in Portland’ ME and it blew my face right off.

Too many to list. If you play a lot of shows or are involved in music heavily you tend to see a ton of live music. The worst shows are shows that are ‘pretty good’… half-baked band ideas, or songwriters. I would rather the band be truly awful and fully committed to their awfulness. I respect those bands.

Mario Lemieux, Jaromir Jagr, Joe Mullen, and Ron Francis. I apologize for not keeping current in my hockey minutiae and for the fact that this is the extent of my knowledge of Pittsburgh. Oh yes, Sidney Crosby! That too.

Thanks, John. I love when I get to discover new music. Looking forward to the album!