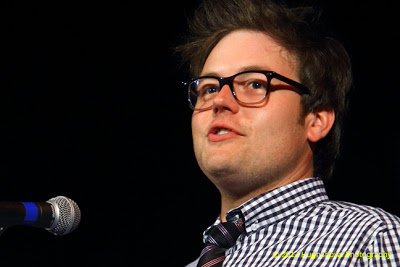 “I co-host the Morning Mix with Cindy Howes.

We wake up really early. That means we go to bed really early. Honestly, I haven’t seen 10:00pm in a really long time. I’m in no way complaining, though. I love my job for many reasons. I have the coolest job in the world. I get to listen to music, talk about music, meet people who share a similar passion for music, occasionally meet some of my favorite musicians, and keep a guitar at my desk. Pretty fun, huh?? That’s only half of my job here at WYEP… I’m also the Coordinator of Digital Services here. What does that mean? Well, if you interact with WYEP on Facebook or Twitter, you have probably interacted with me. I like to sneak in pictures of my adorable Rottweiler, Mumford, whenever I can.”

I recently ran into Joey at a show and he not so subtlety confessed, “I really love to do the First/Last on your blog.” Say no more, buddy. Thanks for playing along.

A very young Joey saved up for quite some time to be able to afford the ‘Batman’ soundtrack. I scraped my quarters and dimes together and picked up a copy on cassette from Camelot Music in Ross Park Mall. Now that tape sits on my windowsill at WYEP.

It’s hard for me to bring home just one when I go record shopping. My last trip to Dave’s Music Mine saw the additions of Frightened Rabbit’s “Sing The Greys”, “…And Justice For All” by Metallica, and the ‘All In The Family’ soundtrack. All on vinyl. It’s all I listen to at home.

Without a doubt, with no questions or flip-flopping… Harvey Danger “Where Have All The Merrymakers Gone?”. I love that album for so many reasons. Infectious melodies, biting guitars, and some of the finest lyrics ever written. I’ve owned at least 5 copies of this album since it came out in 1997. I just keep wearing them out.

Ben Folds Five, “The Sound Of The Life Of The Mind”. I’ve adored Ben Folds Five since the first time I heard ‘Brick’. I’ve enjoyed every album they’ve made. I really dug the Ben Folds solo albums. I was thrilled when I heard BFF had reunited for an album last year. Then I heard it. Crushed.

I like to claim sometimes that it was Superdrag and Nada Surf at Metropol back in 1995. I also like to claim that it was Poe and Eels at the same venue a few months later. I would be lying on both accounts. My brother, Bob, went to those shows. Our mom wouldn’t let me tag along. My first actual concert was the ‘Skoal R.O.A.R. Tour’ outside of Three Rivers Stadium in 1997. I went to see the Bloodhound Gang (still one of my favorite bands to see live) and in the process fell in love with Iggy Pop.

The Mountain Goats at Carnegie Library Music Hall of Homestead on June 11. Misery can be really joyous. I’m a fan.

Too many to list! I loved going to see Goldfinger and Reel Big Fish every time they came through town. Getting brutalized at Laga and Metropol defined my early adolescence. Seeing The Dead with all of the surviving members plus Warren Haynes at Bonnaroo in 2004 was incredibly spiritual. I’d say, if I had to choose one, it would be CAKE at The Palace in Greensburg a couple years ago. They’ve been one of my favorites since I was in grade school and they put on an amazing performance. They also gave away a tree!

Superdrag at Bonnaroo in 2008. I waited almost 15 years to see this band. Maybe it was their fault, maybe it was mine, but I fell asleep in the sun during their set. From what I hear, I didn’t miss much.

Pittsburgh is a great city. It’s home! There’s always something to do here and for a music lover, you couldn’t ask for a whole lot more. Our local bands are incredible. Touring bands love to stop here. We’ve got bridges and mountains and rivers and streams. This is the place to be!

Thanks, Joey. Have to say, I am loving the chemistry you and Cindy have quickly developed in the mornings. I’ll probably be seeing you at a show real soon.