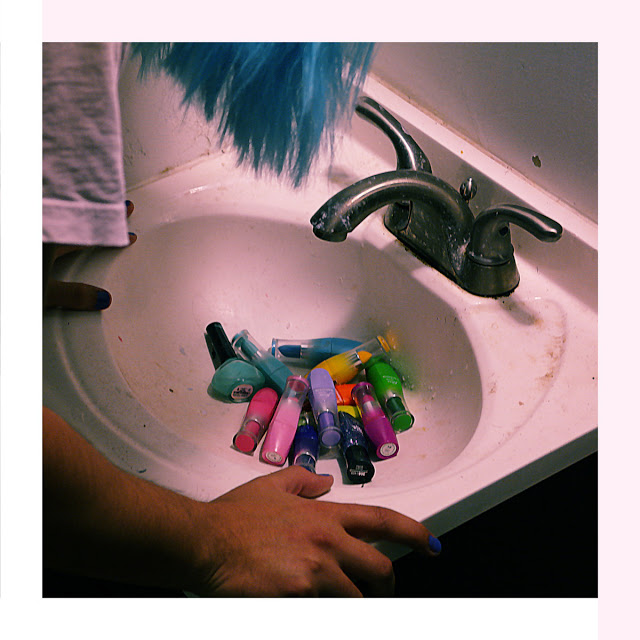 Just Fern is the moniker of Pittsburgh based bedroom pop songwriter Fern Burgess who has branched out into solo territory after fronting the recently disbanded queercore punk trio SOFT GIRL. Fern’s recent full-length debut entitled All The Space I’ve Taken Up is an instant classic of shimmering DIY surf pop, that sounds both thematically relevant and sonically timeless. She tackles intimate and important issues while paying homage to obvious influences such as The Beach Boys. This is one of those rare albums that instantly hits you and grows stronger with each listen. You can catch her playing out regularly in the scene and to give you a taste of her show, I bring you an exclusive video from last week of her set closing Let’s Rob a Bank. I want to thank Fern for taking the time to participate in this edition of First/Last.

Let Go by Avril Lavigne. This album definitely informed my identity way more than I give it credit for. Being a kid
and looking up to Avril as a punk/butch icon definitely helped send me down my current path.

St. Vincent – Masseduction. St. Vincent has been my biggest inspiration for years now and her new album is a
masterpiece of art pop. I was lucky enough to just recently go see her perform Masseduction in full at her Pittsburgh show. No joke, I had tears in my eyes the first four songs and I swear on everything that I believe in that she made eye contact with me during “Marry Me.” She looked slightly upset to see a gay girl cry, ha-ha. But really, St. Vincent is one of the strongest performers and songwriters working today.

Nick Cave – Push the Sky Away.

Nick Cave is one of my favorite songwriters and his 2013 effort is something I could put on repeat forever and ever. The gentle poignant songwriting coupled with the most intense atmospheric production is definitely Cave’s best work and has taught me so much about songwriting. It’s a master class of an album.

I saw The Clarks at the Big Butler Fair when I was a tiny tiny tiny little child. Seeing a local act perform live for the first time really helped imbue me with the spirit of this scene at a young age, and is one of the things that showed me the music industry is bigger than L.A., and there’s great arts & culture everywhere–even in our little city here.

I’ve lived here my whole life, in all sorts of places. I spent a couple years on the Southside, some formative years in the North Hills, and now happily live with my partner just at the edge of city limits down south beyond the mountain. I love Pittsburgh. It’s a big city with the heart of the small town and everyone’s a neighbor, regardless of your differences. If I ever had to leave, the thing I would miss most though is the FOOD. It is damn hard to get bad food in Pittsburgh, I’ll tell you that much. If I ever leave this city I’d better be rich and famous because I’ll need to jet back every week or so to get
an egg sandwich from Primanti’s or margherita pizza from Sal’s or honestly anything from Spak or a TV Tray from Doublewide… sorry I’ve said too much!!!

Thanks, Fern. I have to say, this album is just so damn good. I hear dozens of local albums each year and very few hook me like yours did. Can’t wait to see you play soon.