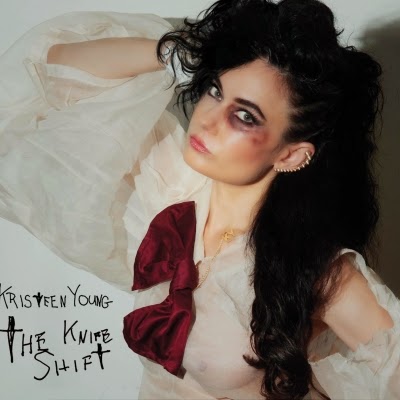 “If you try to put Kristeen Young’s music in a rectangular box, that box would either implode or explode….or perhaps it would “im-explode.” Her music is genre-bending without any obvious boundaries. The effect is grandiloquent characterized by dissonance, operatic scope, and punk torn edges that will leave you in awe. Reaching back to her earliest hard-knock life moments on this planet, Kristeen (a former foster kid originally from St. Louis, Missouri) has accomplished much on her own; without a label, a booking agent or manager – Kristeen Young has always been DIY to the bone marrow.”

Kristeen Young is the name of of the band. It is also the name of the lead singer who’s latest release is “The Knife Shift“. You can hear selections from it when the band rolls through Pittsburgh tomorrow night (4/21) at The Pittsburgh Winery. I want to thank Kristeen for taking the time to participate in this edition of First/Last.

Something Christian…because that’s all I was allowed to own in the very strict and religious foster/adopted home I was raised in. But, I DID used to sneak Prince records into the house. They would be found and broken and then I’d just buy them again. So in a roundabout way they were actually helping Prince sales.

I bought the Foo Fighters’ “Sonic Highways” (at Rebel Rebel record store in New York) because I’m on it. I sing on the last song, ‘I am a River’.

I can’t answer this because I’m not 12 years old so I don’t have ONE favorite album. I have many favorites but more power to the people who have only one. I’m sure it saves a lot of time.

“Sgt. Pepper’s”. I heard about the album from the hour I was born… and when I finally listened to it I couldn’t believe how goofy it was. I’m not a Beatles person but… “Revolver” is so much better. I don’t know why people say “Sgt. Pepper” is their masterpiece.

Again, probably something Christian (a St. Louis local Christian band) for all the reasons I stated above. But… after that… Cheap Trick. It wasn’t their heyday, of course, but I was transfixed.

Probably that first one because it was so transformative. I’ve also felt transformed to the point of tears at a few Morrissey concerts. I was his opening band for quite a few shows so I got to see many. He’s always different, always genius, always individual and as I watched I knew I was experiencing fleetingly special moments. It was also a learning experience and I value that higher than most any other kind of experience.

That Charity concert (with huge legends playing) at Carnegie Hall. Now you know why I didn’t name names.

I remember I was there when one of the tours I was on (as opener) was cancelled. I was extremely disappointed to have to leave without playing. I’m looking forward to exchanging those memories with good ones.

Thanks, Kristeen. I have always envied bands who get to open for musicians they admire and actually get to see them perform night after night. Talk about a fringe benefit.