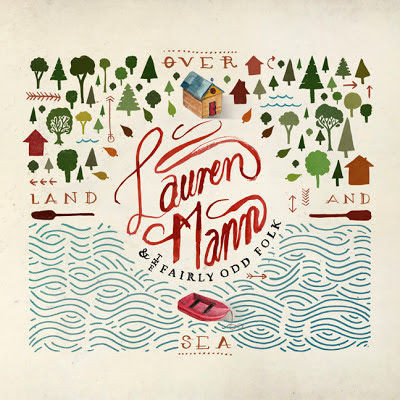 “In a world where the gift of simply appreciating music seems to have been lost, it takes something extraordinary to capture the heart and the attention of listeners. Lauren Mann and the Fairly Odd Folk do just that. From captivating folk-pop melodies to an authentic and energetic performance, you’ll get drawn in to the music and won’t be letting go anytime soon.”

Check out the band at their official Website, Facebook, MySpace, Blog and Twitter. They are touring behind the latest release, “Over Land and Sea“, from Wanderer Records and hit the Moose for tomorrow night’s early show on a bill with Amber Lane. My thanks to Lauren Mann (Piano/Ukelele/Lead Vocals) herself for taking the time to participate in this edition of First/Last.

This will be embarrassing! I don’t specifically remember, but it was probably a Christian contemporary artist…probably the four-female-singers-fronted band Point of Grace.

“Home” by Mike Mains and the Branches.

This is hard, but I think it would have to be “The Everglow” by the band Mae because it’s probably been my most played album for years and it never gets old.

When I was in high school I was really into Death Cab for Cutie and I went to the music store and asked if they knew of any other bands that sounded like them. The guy gave me a Straylight Run album, and it was nothing like Death Cab and not the kind of music I generally enjoy. I tried to like it, but I was fairly disappointed.

I remember my first local show in Calgary, it was with a band I was friends with and a bunch of hardcore bands. It was funny because I didn’t really know those kind of shows existed, and then a little while later I was playing those kind of shows.

We got to see the band Mutemath in Rhode Island. It was incredible!

Really any concert that makes me want to never stop writing music is my favourite. But if I had to pick one, it would probably be seeing Eisley at a small club in Indianapolis. They’re one of my favourite bands and seeing them play live was a great memory.

One time at Warped Tour I was waiting to see The Classic Crime, and on the adjacent stage was Katy Perry. I only caught a few songs, and for her last song she played her famous ‘I Kissed a Girl’. Even though that wasn’t a full concert, that was my least favourite.

I’ve only been to Pittsburgh once and after our show we went to the famous Primanti Brothers Restaurant and had their amazing sandwiches. We are excited to go back!

Thanks, Lauren. Isn’t it funny how a record store clerk’s rec’s for a similar artist can be WAY off? That has happened to me a few times as well.