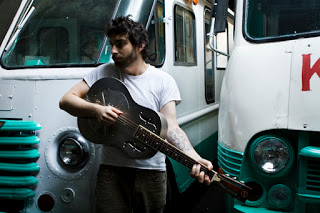 “Leland Sundries’ new EP, The Foundry was released in February 2012. The band is the brain child of Nick Loss-Eaton who played guitar, banjo, harmonium, harmonica, and vocals on the EP. Their last record received praise from The New York Times, who declared “…dedicated to storytelling in a way that recalls Woody Guthrie and his Folkways brethren. [Their] scrappy Americana will get you longing for empty two-lane highways and kudzu-encased back porches.”

The band is touring in support of the EP and stops at the T’Bird in Pittsburgh this Sunday on a bill with Weathered Road and Joan Hutcheson. Score your tickets here. Nick was nice enough to take a few minutes to participate in this edition of First/Last.

Thanks Nick. You share a B-Day with Sir Macca, huh? That’s cool. Small world, so do I! My brutha!