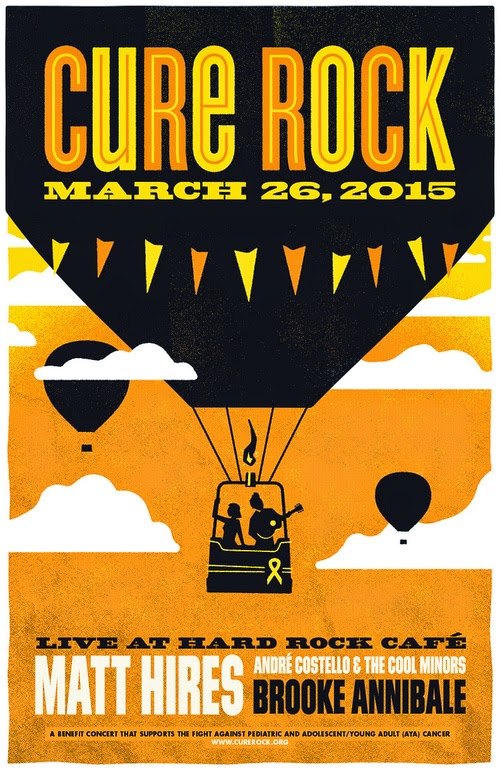 “On his debut album, Matt Hires emerged as a golden-voiced troubadour with a penchant for setting heart-on-sleeve lyrics to sweetly infectious melody. Now, on his sophomore release entitled This World Won’t Last Forever, But Tonight We Can Pretend, Hires weaves in grander arrangements, brighter hooks, and a more richly textured sound to assert himself as a formidable new force in the singer-songwriter realm.”

Matt Hires is a Nashville based singer-songwriter who returns to Pittsburgh tomorrow night (3/26) to headline the CureRock 2015 show at the Hard Rock Cafe. Also lending support for the benefit are blog friends Andre Costello and the Cool Minors and Brooke Annibale. An amazing line-up for an equally amazing cause. I want to thank Matt for lending his support and for also taking the time to participate in this edition of First/Last.

Oh man. The first album I ever bought was “Nu Thang” by DC Talk. They were probably my favorite band at the time, because I wasn’t allowed to listen to “secular” music. My cousin had just given me a hand-me-down Sony Discman, so my first album I bought was also my first compact disc.

The last album I bought was actually from a friend of mine named Kyle Cox. He just put his album “The Plan. The Mess” out on vinyl and I got a copy from him the other day. It’s a great record. I’ve also been listening to “The Book of Rocko Wheeler” by Rocko Wheeler and “Glow” by Katie Buchanan.

That’s a really tough one. It would have to be between “Summerteeth” by Wilco or “Heartbreaker” by Ryan Adams. Or maybe “Another Side of Bob Dylan”?

Ha-ha. This isn’t something that I think of very often, and I’m finding that it’s actually hard to think of one. Maybe because the disappointing albums are pretty forgettable. But I can say with confidence that by least favorite musical act at the moment is Florida Georgia Line.

Back to the whole “no secular music” thing. My first concert was a band called Audio Adrenaline at a big church in Tampa, where I’m from. It was actually a really good show. I remember loving their bassist’s energy, and soon after that I started playing the bass. That was my first instrument. I don’t play it very much anymore, but it’s so much fun when I do.

I just saw Kyle Cox, who I previously mentioned, play a house show a few days ago. I’m way into house shows these days. It was a great time. I recently moved to Nashville from Tampa, and I’m really pumped to go to my first show at The Ryman this Friday night. I’m seeing Dr. Dog and mewithoutyou. Two of my favorite live bands.

Growing up in Tampa, I found that a lot of artists don’t make the trek down into FL when they’re on tour, but instead they’ll only go as far south as Atlanta. I made a few road trips up to Atlanta to see some of my favorites, and it was always worth it. My favorite show of all time was Sufjan Stevens at The Fox Theatre in Atlanta sometime in ’06 or ’07. It was incredible.

My least favorite concert was one of my own. Am I allowed to say that? It was even that I played bad, or anything. It was just really awkward. A few years back Gap was supposedly doing this “day of music” thing where they had a bunch of artists play in stores across the country. They were having me play at their Las Vegas location, which I thought we be pretty cool. It turned out to be at an outlet mall outside of Las Vegas. I sat on a small step-ladder and played for half an hour to some mannequins and 3 or 4 people who just wanted to shop for jeans. Not my proudest moment.

I’ve played in Pittsburgh a lot over the past several years, and it’s always been a good time. It’s a great city. I’m really hoping to be able to eat at PGH Taco Truck when I’m in town, because those tacos are unbelievable!

Thanks, Matt. That GAP story is hilarious. In fact, Pittsburgh had the same shows here and I was on assignment for a local mag to shoot a band called Sounds Like Silence at one of the stores. Awkward indeed!