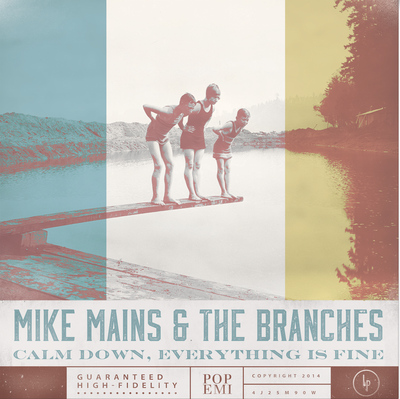 “Mike Mains and the Branches step into that world to offer a breath of fresh air in the form of eleven shimmering, propulsive indie rock songs. The message of their sophomore full-length, Calm Down, Everything Is Fine, is laid bare right in its title, so take forty minutes with your phone off and your eyes closed to let it sink in.” – Troy Sennett Under the Gun

Mike Mains is an indie rock songwriter from Michigan who is kicking off his Spring tour in Pittsburgh tonight (Wednesday, 4/18) at The Funhouse at Mr. Smalls behind his sophomore release Calm Down, Everything is Fine. Joining him for support are locals Matthew Maraist and blog faves Ryan Hoffman and the Pioneers. I want to thank Mike for taking the time to participate in this edition of First/Last.

Leanne Rhymes (Yes, I know I’m a farmer at heart, SUCH a good show though.)

The National touring Trouble Will Find Me.

Mickey Avalon (Woof. That was quite a trip I was tricked into watching.)

Favorite thing about Pittsburg is the friendships we’ve made in that City. We’ve had so many fans open their homes to us and those relationships have grown into some great friendships. Pittsburgh people are loyal and tough, which are great traits!

Thanks, Mike. I had to look up Mickey Avalon. Maybe it would have been better if Simon Rex was with him… maybe not?