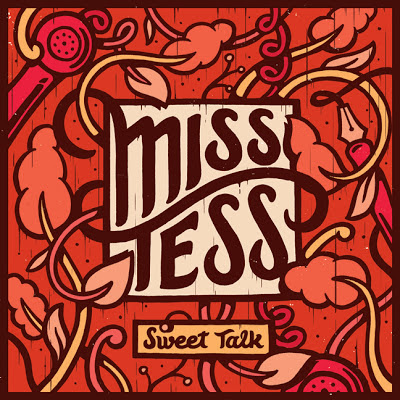 “When you decide to go into the studio,” reflects Miss Tess from her home in New York City, “the timing has to be just right.” In fact, uncanny timing informs and enhances nearly everything Tess does, from her disarming, behind-the-beat vocal phrasing to her solid yet gently swinging rhythm guitar. In the years since she first emerged, she has wisely learned to trust her sense of timing. “In this case, we had a batch of unrecorded songs, the studio I wanted to use was available, and the band was tight after touring all year.” The resulting album, Sweet Talk (available October 16), is Tess’s first studio album in three years, her first for Signature Sounds, and the debut of her newly christened backing outfit, The Talkbacks. While still bearing hallmarks of the simmering, jazz-inflected sound that has made Tess and her former band the Bon Ton Parade a club and festival favorite, Sweet Talk introduces a more personal mix of influences. By blending her knack for melodic and rhythmic improvisation and interplay with elements of honky-tonk, western swing, and golden-era pop standards, she and her multifaceted supporting band have arrived at a style simultaneously refreshing and hauntingly familiar. “By changing the name of the band,” she says, “I wanted to let people know that our sound had evolved: now there’s a much stronger country and early rock’n’roll influence—and different instrumentation.”

Check out Miss Tess at her official Website, FaceBook, Twitter and YouTube. The band hits Pittsburgh tomorrow night at the T’Bird with support from my boys Dan Getkin and the Masters of American Music. My thanks to Miss Tess for taking the time to participate in this edition of First/Last.

Thanks, Tess. Really digging the chill vibe of your music.