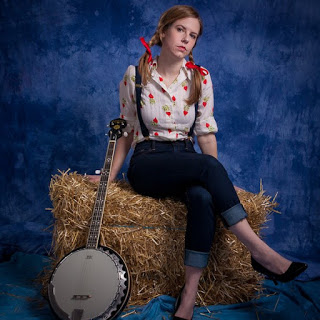 I have never seen Molly perform but hope to remedy that soon. She is soon beginning work on her new record following up from her self-titled EP released early this year. My sincere appreciation to her for taking the time to participate in this edition of First/Last.

“Bad Hair Day” by ‘Weird Al’ Yankovich. For middle-school Molly, Coolio’s beef with Weird Al was the real rap battle of the 1990s.

It’s not really an album per se, but it was “Tammy’s Greatest Hits” from Tammy Wynette. I moved into a new office at work, found a box of old records, and traded them in at Attic Records for some classic country I’ve been meaning to explore. Tammy took some flak for songs like ‘Stand by Your Man’ but she sings them with such agony that you can feel the pain of women from her time and place. The song ‘Divorce’ in particular stomps on your guts the way any good country tune should.

“Muswell Hillbillies” by The Kinks. This album started the chain reaction that eventually opened me up to country music. A bunch of dudes from England taught a city girl from the rust belt how to romanticize the American South. “Cos I’m a Muswell Hillbilly boy, But my heart lies in old West Virginia. Never seen New Orleans, Oklahoma, Tennessee, Still I dream of the Black Hills that I ain’t never seen.”

Just about every Dolly Parton album…for totally selfish reasons. I’ve started writing songs since our first recording project, and my favorite kind to write is your standard sassy, turn-of-phrase, tongue-in-cheek country song. It’s damned near impossible to come up with ones that Dolly hasn’t already done (see ‘Dumb Blonde’, ‘Backwoods Barbie’, ‘Something Fishy’…). Damn you, Dolly!

The first three concerts I attended were all ‘N Sync, and I cried from the depths of my soul at every one of them. I still have PTSD from the time my dad pulled up to a group of fans on the way there and joked, “Is this the way to the Backstreet Boys concert?” Not cool, Dad. NOT cool.

Last year I was given third row tickets to see Gillian Welch at the Byham Theater that I totally didn’t deserve. I had just barely gotten into her music and didn’t really know what to expect. She completely blew me away. Next time she comes through, I will have earned my ticket twice over.

In the summer of 2004, my friend Katie and I drove out to South Park Amphitheater to see Rockapella. Homeboys have totally sold out. They wouldn’t even sing ‘Where in the World is Carmen San Diego?’ despite our repeated pleas for them to, you know, “Do It!”

I can’t say enough good things about Pittsburgh. I went to college in DC, which is generally a cool town, but I was so ready to come back home after four years. The population there was so transient and the culture was so young that it never felt like a “hometown” to me. Then I came back to Pittsburgh and found old-timers, average dudes, and hipsters alike at the same bar watching the Pirate game. Home!

Thanks, Molly. Would love to be a fly on the wall (with a camera) during your upcoming studio time…hint, hint!