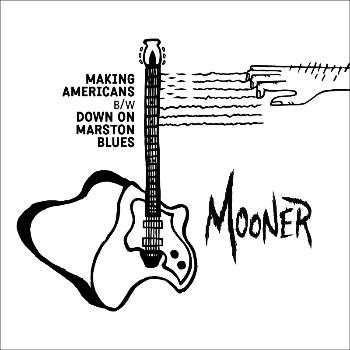 “Mooner began in 2007 in a bedroom in Oregon, when Lee Ketch started recording songs with an old video camera microphone, playing guitars, bass, keys, and every part of the drum kit, one instrument at a time. Those home recordings were a solitary dude’s love letter to the big guitars and lean melodies of The Heartbreakers, The Attractions, Television and Wilco–the type of tight rock unit a solitary dude can’t be on his own, the type of tight rock unit Mooner is now.”

Check out the band at their official Website, Facebook, BandCamp, SoundCloud, Reddit , MySpace, Last.fm, YouTube, ReverbNation and Twitter. They have just released their latest single, “Making Americans” and I want to thank Lee Ketch (Guitar/Vocals) for taking the time to participate in this edition of First/Last.

Rammstein’s “Mutter” in 2001. I had just moved to Oregon and as an act of aggression towards my parents for making me move I asked if I could buy some music and then ordered “Mutter” on Amazon as a German import. It cost thirty dollars. My parents found the CD under my bed, translated some of the lyrics and made me send it back.

The Canoe’s “Slim Century”. They’re a Chicago rock band that broke up about a year ago. They were my favorite local band.

My first year of high school I listened to a lot of Miles Davis because my English teacher said he was “the only American musician that mattered” and I wanted the English teacher to think I was cool. I listened to all the career highlights and loved them but then I got to one of his ‘80s albums called “You’re Under Arrest” and it is just the biggest pile of steaming crap. It’s comprised mostly of ‘80s pop covers like ‘Time After Time’ rendered in a flat, karaoke-style smooth jazz style. He bleats aimlessly over Michael Jackson’s ‘Human Nature.” He had all these world class session players and they pumped out 100% Kenny G. I was writing a paper about Miles Davis for the same English teacher and when I got to the 80’s Miles era I wrote angrily about how he had no artistic integrity. The teacher wrote all these big question marks in red pen in the margins of that section.

My first show was in the basement of a church called SolidXState in downtown Portland in 2002. Local thrash band Almost is Nothing headlined and my friends’ screamo band Farewell Field opened. It was awesome. I tried out my first mosh pit. The Almost is Nothing guitarist was a cancer survivor and I think he had a prosthetic leg. I’ve never met someone more metal then he.

Mark Mulcahy at the Hideout in Chicago. He was so good. My wife broke down in tears when he did ‘She Is Staggering’.

I saw a Bobby Conn show in March. That was great!

In high school I bought my girlfriend tickets to see her favorite musician, Ben Gibbard, at the Roseland for her birthday. She got really sick the day of the show and I was the biggest dick about it. “We’re going. These tickets were expensive and this is going to be a special day and I got you these flowers.” She spent half the concert on the ground in the back trying not to throw up and I stood next to her scowling, listening to Ben Gibbard. Her mom texted me to bring her home immediately and she threw up on the way to the car and then the parking attendant parked us too close to another car and me and three guys had to lift the rear end of my Plymouth Cavalier and inch it into the driveway for what felt like a half hour. Then I drove home with a sick girlfriend who was past being angry and just wanted to go to sleep and not speak to me for a week.

My friend worked at a Dunkin’ Donuts in Pittsburgh so it’s probably a good town!

Thanks, Lee. Diggin’ ther new music, man. When ya hitting Pittsburgh? I’ll buy you a donut for sure!