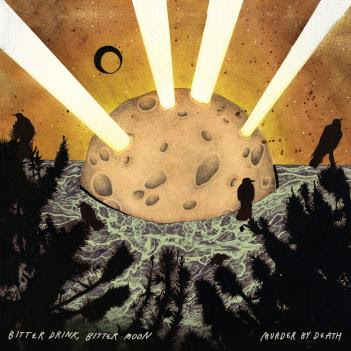 “On the surface, Murder By Death is a Bloomington, IN quintet with a wry, ominous name. But behind the geography and moniker is a band of meticulous and literary songwriters matched by a specific brand of brooding, anthem-riding balladry and orchestral indie rock. Murder By Death’s path began in the early 2000s as most Midwestern college-town groups do, by playing to small crowds at ratty venues and frenzied house parties. While many of their formative-year scene-mates failed to make it much further than campustown’s borders, Murder By Death translated their anonymous beginnings into a 10+ year career founded on a bedrock of five full-length albums, tireless D.I.Y. touring and performing ethics, and, most importantly, a dedicated, cult-like fanbase.”

Check out the band at it’s official Website, Facebook, MySpace and Twitter. They hit Pittsburgh on Sunday at Smalls touring behind their latest Bloodshot Records release, “Bitter Drink, Bitter Moon“, on a bill co-headlining with Man Man and special guests Damion Suomi. My thanks to band’s rhythm section Matt Armstrong (Bass) and Dagan Thogerson (Drums) for taking the time to participate in this edition of First/Last.

Thanks, fellas. Got a somewhat dark vibe going with this record. I love dark!