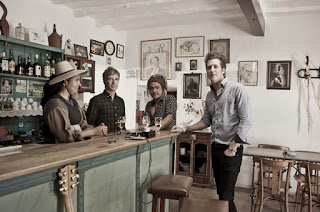 “”Did you ever, as a kid, want to crawl into the speakers?” asks Nada Surf singer-guitarist Matthew Caws. “I did — here was OK, but there was much better.” And that’s pretty much what Nada Surf is all about — Caws, bassist Daniel Lorca, and drummer Ira Elliot are in love with the way rock music can transport you to a new and wonderful place in a beguiling rush of beats, chords, hooks and words. And they do it 10 times over on their brilliant sixth album, “The Stars Are Indifferent to Astronomy”. Before, Nada Surf albums simply took on the character of the songs that the band came up with at the time. This one was different — there was a plan. “We’ve always played faster and a little harder live,” Caws says, “but we’d play so carefully in the studio. So with this album, we made a conscious decision to preserve what it felt like in the practice room, when you play with that new-song energy. Just embrace it and not worry whether we’re overdoing it, kind of get all the thinking out of the way.” The stars has a somewhat more optimistic, more outward-looking tone than previous Nada Surf albums. On the yearning waiting for something, Caws sings, “This new peace/ I can feel it now,” and that serenity — and not anger — is actually what fueled the music’s extra kick. The stars are indifferent to astronomy continues the notion of music as an alternative reality, and songs as things you can keep by your side for inspiration and support. Which is what makes Nada Surf a truly beloved band.”

The band brings their tour (after a VERY long absence from Pittsburgh, I might add) to the Northshore tomorrow with (awesome) support from WATERS. The band’s longtime drummer Ira Elliot was nice enough to take a few minutes to participate in this edition of First/Last.

Kiss, “Alive”. I was twelve at the time and that rock and roll/comic book combo really had me.

Louvin Brothers’, “Tragic Songs of Life”. I was forty-nine at the time and that beautiful harmonies/ harrowing tales combo really had me. This was last week, btw.

“Abbey Road”. If you’ve never heard it you might wanna check it out. It’s quite good. I promise.

Southside Johnny and the Asbury Jukes, Robert Gordon opening, The Palladium, NYC, 1979. I wasn’t really a big fan of SSJ but a friend of mine was and he got the tickets so I decided to get out of the house on a Thursday night for once. I was much more impressed with Robert Gordon and his whole rockabilly deal than with the big show band.

McCartney at Fenway Park 2010. I was out on tour when he played here in NY at Citifield so when I got home I bought three tickets and drove up to Boston with two friends and had a teary-eyed good time. We have a band together actually, Bambi Kino, that plays all the stuff the Beatles were playing in Hamburg from 1960-1962.

McCartney at Fenway Park 2010. I would also nominate Radiohead at Irving Plaza circa ’98, Iggy and the Stooges with Ron Asheton 2007 at the United Palace Theater, Echo and the Bunnymen at the Beacon Theater in NY on the “Ocean Rain” Tour and another Stooges show with James Williamson on guitar and Steve Mackay on sax in Strasbourg, France in 2010.

Hands down, Dave Matthews, Madison Square Garden, Bela Fleck opening, 1998. Oh my god. Why did I do that to myself? Awful. Memo to me: Avoid banjos and saxophones (unless it’s Steve Mackay) at all cost.

I played in Pittsburgh for the first time with the Fuzztones back in 1984, if you can believe that, at the Electric Banana. I was 21 and I remember having a very, very good time. It’s been too long and I’m glad to be back!