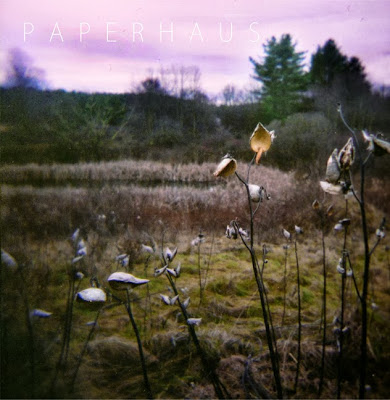 “Paperhaus started in a basement in the suburbs of Washington, DC, where guitarists Alex Tebeleff and Eduardo Rivera spent their teenage years playing music together with ears buzzing from Radiohead, Television, and Fela Kuti. Miles away in Philadelphia, the dissonant vibrato of drummer Brandon Moses howled over distorted blues, while bassist John Di Lascio’s three drunken years playing absurdist prog-pop in shady Japanese yakuza bars were winding down. When the haze cleared, these four musicians found themselves in the RedD oor room in DC’s legendary Gold Leaf Studios (R.I.P.), screaming raw vocal poetry into rickety old mics and bleeding cosmic noise through rusty tube amps. All night jams edged into anything from CAN to DC Gogo, while haunting noisescapes echoed of Sonic Youth and Scott Walker. Above it all hung Country-Blues & Pop-oriented arrangements with deeply personal lyrics.”

Check out the ‘psychedelic kraut-pop’ band at their official Website, Facebook, Twitter and BandCamp. The band’s latest release, “Lo Hi Lo“, will definitely be prominent in their set as they hit Pittsburgh tomorrow night at the Thunderbird Cafe along with local favs Pet Clinic and Action Camp. I want to thank Alex Tebeleff (Guitar/Vocals) for taking the time to participate in this edition of First/Last.

Thanks, Alex. I totally second your love for “The SMiLE Sessions“. I can’t believe he was so whacked out not to finish and release that back in the day.