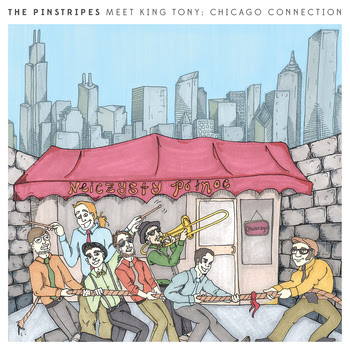 “If you’re not having fun at a Pinstripes show, brothers and sisters, check for a toe tag. Your autopsy may already be in progress. Winners of the 2007, 2009 and 2010 Cincinnati Entertainment Award for Best World Band, The Pinstripes don’t merely play Ska and Reggae — they inhabit the sound like it’s a ramshackle house that’s keeping them alive. Tight but never slick, fun but never goofy, intense but never serious, The Pinstripes (a hard-touring band with a hard-won following) combine Ska, Reggae, Dub and Soul to create something that’s genuinely lacking in a great deal of contemporary music: joy.”

Check out the band at their official Website, Facebook, BandCamp and Twitter. The band stops in Pittsburgh tonight for The Smiling Moose late show and I want to thank Mike Sarason (Vocals/Saxophone) for taking the time to participate in this edition of First/Last.

I’m not sure exactly what the first album I bought was, but the ‘Space Jam’ soundtrack was definitely early on. Reel Big Fish’s “Turn the Radio Off” was also definitely one of my favorite early album purchases.

The last album I bought is probably the soundtrack to ‘The Sting’ on vinyl… which is not only a great soundtrack, but one of my favorite movies. I don’t listen to that many soundtracks really, so I guess it’s weird that I’ve already mentioned two in the first two questions.

I have difficulty with this questions as it seems to be a pretty fluid thing for me. Some of my favorites that I can always come back to are Bob Marley & the Wailers “Live at the Record Plant”, Mos Def “Black on Both Sides”, The Slackers “Wasted Days”, The Budos Band “II” but really there are so many more I could name and I don’t know if I’d so those are my all-time favorites… they certainly are pretty awesome though!

That one pseudo-pop record that the Suicide Machines put out was pretty weird. I think I was probably disappointed when I bought that. I think it was the self-titled one. But I’m not sure if I have a most disappointing album at this point. Shoot, I should probably try to find one.

The first “show” that I ever went to that wasn’t something that my parents took me to, but rather of my own volition, was The Dropkick Murphys with Lars Fredricksen & the Bastards in 2001 I believe.

I’m not sure if this really counts, but I did some work for Bruno Mars last month when he was doing rehearsals for his current tour and on the last day I got invited to just sit and watch the final rehearsal. So technically that’s the last show I saw… and it was actually really entertaining, the dude definitely has got it going on.

When I think about my favorite concerts, it’s usually ones from early on in my concert-going experience that really blew my mind at the time. The first couple times I saw Ozomatli, back around 2003/2004, were really amazing. My first time seeing the Slackers was great, which was when they were opening for Flogging Molly, also awesome. On St. Patty’s Day 2007, I saw Lupe Fiasco and the Roots in Chicago, that was a really great show, the Roots were touring with a horn section… lots of fun. Recently, some of the most fun/impressive shows I’ve seen have been getting to see Lyle Lovett in concert and then Antibalas, which was a total blast.

Again, I don’t tend to think too much about least favorite experiences… I guess what comes to mind is the last few times I’ve been to Warped Tour… I’ve gone really to hang out with friends who were in bands on the tour. But man, just being in that environment was an overload of just… I don’t know… I just found it very overwhelming and annoying. But hey, I’m already a good 10-15 years outside of their target demographic, so they’re definitely not trying to cater to me anyway!

Being from Cincinnati, Pittsburgh has always been a rival town of sorts. Our sports teams go head to head and we both compete as river towns that are trying to stand out on their own as growing cities in the 21st century. So I’ve always been kind of unnecessarily competitive in my attitude towards Pittsburgh. But it’s actually a pretty cool town. It’s got some cool record shops, fun environments to walk around and some good sandwiches I guess? Haven’t had them yet, but I need to try those Primanti Brothers soon….

Thanks, Mike. Funny how much cities are defined by their sports rivalries?