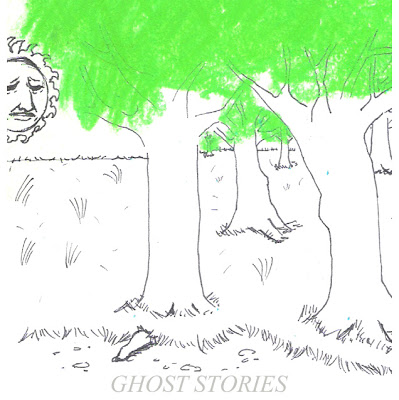 “Psychophant is a singer/songwriter that has been recording songs in his bedroom since 2009. Armed only with his voice and an acoustic guitar, he keeps things colorful and demented by using a range of distorted and altered sounds as instruments as well. His self-released debut album, By a Lonely Campfire, and its follow-up EP, Ghost Stories, were written together as a twisted journey through his day-to-day experiences and thoughts during an extended 4 month stay in the forest.”

Check out the band on Facebook, BandCamp, Last.fm and SoundCloud. Psychophant, AKA Lingsdook, is the project of Pittsburgh-based Richard Fairlie. He has put out a couple of great lo-fi gems and doesn’t seem to play out that often. Shame because I would really like to see him live. I want to thank Rich for taking the time to participate in this edition of First/Last.

This is a tough question to answer because I grew up in Puerto Rico, and because of that I wasn’t exposed to any English-speaking music for a portion of my life. Any albums we bought then I have a hard time remembering. However, I do fondly remember listening to a Paul McCartney “Greatest Hits” CD in the car all the time. I was quite fond of Elton John as well.

“Centipede Hz”, the newest Animal Collective record. It seems to be a very polarizing record, but I loved it a lot. I’ve listened to it dozens of times since it came out, and I just had to buy it.

I usually don’t like putting anything down, because I’ll find something I like in most music, but I guess one of the biggest disappointments in recent memory was Lana Del Rey’s record. She had these really nice, pretty singles and then the album itself was kind of boring and frustrating to listen to.

This is kind of embarrassing, but my mother took me to an Air Supply concert when I was younger. We were sitting down eating dinner with the band playing on stage. The whole thing was a bit of a humdrum.

Last concert?
I saw of Montreal at the Altar Bar last summer. It was like going to a huge party and everyone there was so energetic, it was fantastic.
Favorite concert ever?

The Flaming Lips. The visual component to the concert was just amazing, and Wayne Coyne’s stage banter was great. On top of that, the performances were top notch. It felt like a real communal experience, which I feel is very important for a concert.

Probably the Air Supply concert I mentioned before. Nothing against the band’s music, but it was a very monotone experience.

Pittsburgh’s not perfect, but compared to other cities I’ve been to, it just feels so homely and welcoming while still offering a wealth of people and things to do. I gladly put up with all the football fanaticism to live in such a well-balanced city. One particular memory I have, is the last time I went to Hookah Bookah at South Side with a friend of mine. After we left, we found the soundtrack CD to one of the Pokemon movies in her car. We rolled the windows down and blasted it at full volume as we drove across Downtown at midnight. I found it hysterical, being obnoxious kids can be extremely fun.

Thanks, Rich. Very cool music you are producing in that room of your, man. Would love to hear more in the future, for sure.