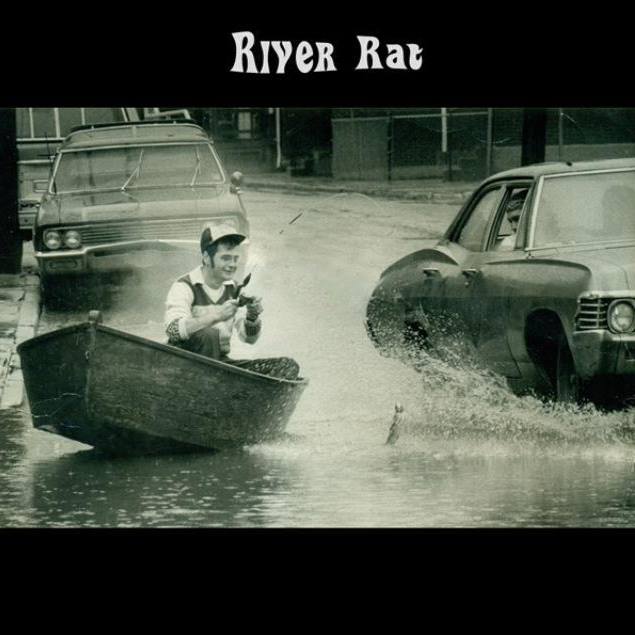 “River Rat started as a blank piece of paper in December of 2013. By the end of the month, there were many pieces of paper scribbled with hardly legible ideas, melodies and arrangements. They were formed from life experiences, good & bad, light & dark, but either way from a place of honesty. A little time went by and the ideas began to become somewhat recognizable. Hours and hours were spent alone with these ideas until they had become strong enough to stand on their own, but still sparse and existing in a black and white state.”

River Rat is a brand new ‘band’ formed by former Coronado drummer Marc Martinka. With the help of a who’s who of Pittsburgh musical all-stars, Marc just released his fantastic self-titled debut. There’s a lot going on here with tinges of psychedelia, country, rock and blues combined to form one of the most exciting local debuts I have heard. Let’s hope this is just the beginning and possibly expect some live shows? As I patiently wait, I want to thank Marc (Drums/Percussion/Piano/Backing Vocals) for taking the time to participate in this edition of First/Last.

The first three I remember getting at the same time, The Stray Cats debut album, The Clash “London Calling” and “Face Value” by Phil Collins. I was four or five and had these on LP’s.

“Brothers And Sisters Of The Eternal Son” by Damian Jurado and “I Love You Honeybear” by Father John Misty both on the advice from mi amigo Paul Luc. Both great albums.

“The White Album” and “Exile On Main Street”. Can’t pick between the two. I have a thing for double albums. I think both of those albums are just so perfect. “The White Album” had The Beatles stripped back down a bit coming out of “Sgt. Pepper” and “Magical Mystery Tour” so it has a raw edge to it that I love. “Exile” I think is the Stones at their peak. The Country-Blues and Gospel influenced stuff on there seem so effortless and natural. Maybe the best pure rock n roll album ever made in my book.

MGMT’s last album. I loved the first two major label releases but the self-titled third is just absolutely awful in my opinion. I just didn’t get it.

Lollapalooza ’93 at Star Lake was the first real big concert I attended. Fishbone was the absolute highlight.

The Stones at Heinz Field, the sound wasn’t that great but they were on and to hear ‘Moonlight Mile’ live was an special experience for me as that song is one of my favorites from them and wasn’t ever expecting to hear it live.

Pink Floyd ’94 at Three Rivers Stadium. Me and a few friends skipped out of school to go and I haven’t been the same since. A life changer. I walked in 15 years old and walked out with the wisdom of someone who has been around for awhile.

I remember being at a particularly bad Bob Dylan show but I can’t remember what year it was. Thankfully, it was redeemed by two great back to back Dylan shows at the Civic Arena and State College in ’99.

The music scene is incredible and filled with so much talent right now. I sat in with Coronado for the Deutschtown Music Festival and it was just an amazing day seeing so many people throughout the North Side showing up to support Pittsburgh Music. There are so many bands and artists that I absolutely love. I also love how we are such a big sports town. You can walk into a bar and see people from all walks of life throwing around high-fives after a score that normally may not have acknowledged each other. Sports brings our city together more than I have seen elsewhere which to me is really cool.

Thanks, Marc. Such a nice surprise with this album, man. As I questioned earlier, any plans on playing this material out live? I can only hope so.