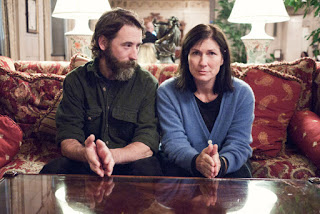 “R. Ring is Kelley Deal & Mike Montgomery. It is voices, guitars, and keys. It is sparse, chaotic, abrasive and lulling, often within the same song. It is new. It is, at the very least, a stark departure from the music they make in their other bands (Kelley plays in The Breeders, Mike plays Ampline). They are currently putting finishing touches on recordings for a 7″single, due out on Misra Records. Kelley lives in Dayton, OH. Mike lives in Dayton, KY. Kelley makes and sells scarves and knitted items. She has her own font called Saltwater. Mike records music, rides skateboards, and builds things. He has knitted a dog collar, with great assistance.”

The band stop in Pittsburgh tomorrow and I want to thank Mike for taking a few minutes to participate in this abbreviated edition of First/Last.

The Davy Crockett 7″. ‘Born on a mountain top in Tennessee, killed him a bear when he was only three… Raised in the woods so he knew every tree…’

I don’t have a favorite or least favorite album, although I would go for long spells playing certain gems as I drifted off to sleep. Dinosaur Jr.’s “You’re Living All Over Me” and Superchunk’s “Incidental Music” come to mind.

Memorable notes about Pittsburgh…I used to play a place called ‘The Smiling Moose’a lot. That was fun. EDfromOHIO and Mike and Eric of the band FOOD live thereand they’ll be playing with us at the Shadow Lounge.

Thanks Mike. Looking forward to your set on Friday.