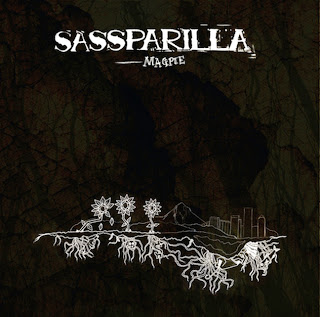 “Long considered one of the most entertaining, sweaty live shows in the Pacific Northwest by fans and concertgoers, a Sassparilla live show consists of dancing, sing-along numbers, and plenty of good times. Following 2012’s release of The Darndest Thing, with Magpie the band continues with an equally spellbinding recording, delivering a record that gives fans a collection of songs structured on the melodies and lyrics more so than the party groove and liveliness of their earlier recordings.”

I bought my first album with my best friend and neighbor when we were in fourth grade. We split the cost and then shared custody. He’d get it one day, I’d get it the next. “Back in Black” by AC/DC. Man, I loved that record. My folks had the ultimate vinyl collection and I was allowed to plow those fields whenever I fancied. My Dad loves music. I grew up with all the classics, The Beatles, Mac, Cream, Blue Cheer, etc. I never really had to buy records until I was in college ‘cause my folks had everything I needed. Except AC/DC, which they hated.

We just played a festival with Shovels and Rope and we traded records. If I didn’t get a free copy, I would buy this one, “O Be Joyful”. Truly one of my favorite albums right now.

Everyone loves the deserted island question, don’t they? Man, my favorite record changes with my mood, the season, my activity. There are several records I couldn’t live without. I was talking to the producer of our last two records (Chet Lyster) about this over some whiskey last night. I think we both landed on “Exile on Main Street”. That record has everything, country, blues, soul. Everything. They were KIDS when they made that record. Showing the boys back in the states how to play their own music. The Stones OWNED it.

I have a lot of things I’m not into, but I don’t really see the purpose of slamming someone else’s hard work or passion. I think there is merit to every effort, if not only for that artist.

The first concert I’ve gone to see since starting Sassparilla in five years was Jack White here in Portland. That man is a genius.

I would say that Jack White show takes the cake right now.

The first Lollapalooza. Only because it was so frickin’ hot.

Man, I love anything with grit. Pittsburgh in my mind rivals all other towns for grit. It’s the ultimate fuck all y’all town. Their beer, their football, the whole enchilada. It looks a lot like Portland too!

Thanks, Kevin. Really loving the new album. Hope to see you in Pittsburgh sometime soon.