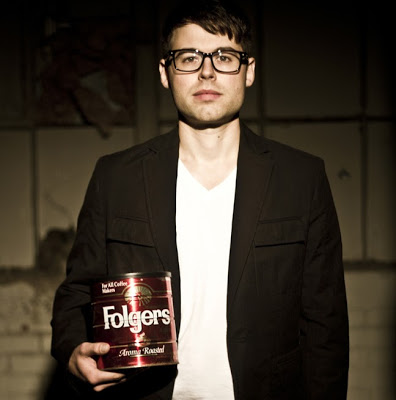 “Going to see a show should be about what happens that day, in that room, between that audience and that performer. It shouldn’t be a carbon copy of the same performance from the night before. How I slept, what I ate, the conversations I had, the articles I read: all of those things affect my brain chemistry and how I’m going to interact with the songs that day. Making art is an incredible opportunity to synthesize and reinterpret our unique lived experiences and reintroduce them to the world as shared dreams of sound and light. If I used canned backing tracks I’d be robbing myself of that opportunity. I want the freedom to make mistakes. Mistakes are far more human and interesting than mechanized accuracy. Be suspicious of anyone who wants to scrub art of its imperfections. As soon as art becomes perfect, it dies.”

Check out the band at their official Website, Facebook, Twitter and BandCamp. The Columbus, OH based ‘indie-pop’ band is the moniker of songwriter Philip Cogley who travels over to The Center of Harmony tomorrow night for a special performance. You can also catch him earlier in the morning on The Saturday Light Brigade. I want to thank him for taking the time to participate in this edition of First/Last.

I can’t recall which was first, but I know that the first three compact discs I owned were Metallica’s “Black Album”, Weezer’s Blue Album, and Counting Crows’ “August and Everything After”. I know that I purchased some cassettes when I was younger, but I can’t remember what most of them were. I do know for certain there was a DJ Jazzy Jeff & The Fresh Prince cassette in there somewhere, along with the ‘Teenage Mutant Ninja Turtles’ film soundtrack, featuring Vanilla Ice’s immortal ‘Ninja Rap’.

I think the last record I bought would have been “Modern Vampires of the City” by Vampire Weekend, which is excellent. I didn’t buy it (at least not yet), but more recently a friend hooked me up with Kendrick Lamar’s entire discography.

“Favorite” is a tricky word… there are so many different ways music can affect a person and different roles music can play in a person’s life. However, Radiohead’s “Kid A” probably had a bigger impact on me than any other collection of music I can recall.

I used to really like Coldplay, and believe it or not, once upon a time that wasn’t an embarrassing thing to admit. I still think “Parachutes” is a pretty solid album. You started to see on their second record that things were probably going to go south, but I still had high expectations when I went to buy their record, “X & Y”. I really wanted to like it, but I ended up feeling totally betrayed.

Ooh, this is embarrassing. Pretty sure the first show I ever went to was Bush. Goo Goo Dolls and No Doubt were supporting. It was so overblown and melodramatic, but at the time my friends and I thought it was amazing.

Earlier this week, I went to see my buddy Dolfish (Cleveland-based singer-songwriter Max Sollisch) at a venue here in Columbus. Max is an excellent songwriter and an engaging performer, so it was an enjoyable evening as always.

I think it would have to be a tie… in middle school I got to see Rage Against the Machine in St. Louis, Missouri at an outdoor amphitheater with my older brother. Somehow he and his friends got tickets in the second row. It was positively electric. Then in college some friends and I were able to score floor seats for Radiohead at Madison Square Garden. I’d seen Radiohead before and I’ve seen them since, but being able to see them just four or five rows from the stage was incredible. An entirely different kind of experience.

I had to think hard about this one. I think probably the correct answer is T.Raumschmiere, who I saw in Columbus, maybe back in 2005 or 2006. Though I think the fact that I remember the performance at all means that there was a strange kind of grandeur in how unpleasant it was.

I actually lived in Pittsburgh for a year, from fall of 2007 to fall of 2008. I worked at the Shadyside Apple Store, first as a salesperson and then in the repair room. So if any of your readers bought a computer or had one repaired at that store in that time frame, I very well may have been involved. I still think Pittsburgh has one of the most dramatic skylines in the country, with the exception of maybe Manhattan and Chicago. I get a really warm feeling every time I pop out of the Fort Pitt tunnel and boom—there’s the city. My entire extended family is from northwestern Pennsylvania (generally the Meadville/Titusville area) and as such, I was raised a Steelers fan, so Pittsburgh feels like home in a lot of ways.

Thanks, Phil. So cool that you hooked up with Allie. She is building up a sweet scene in Harmony and she is definitely good people.