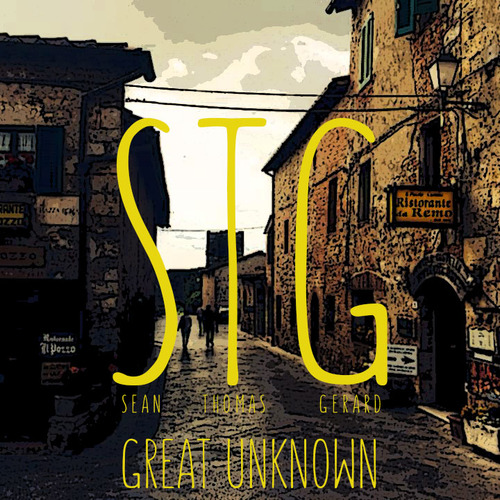 “When performing solo, Sean’s songs are stripped bare, exposing his keen sense of melody and songwriting craftsmanship. He delivers his songs with great intensity and undeniable sincerity. His catchy, yet haunting tunes, chocked full of dreamy lyrics and clever observations, will stick with you for days. He can sing you to sleep, or wake you from the dead with his dynamic vocal stylings.”

Sean Thomas Gerard is a singer-songwriter and multi-instrumentalist born and raised in Pittsburgh, now residing and performing in Wilmington, NC. As a member of the rock band Onward, Soldiers, Sean has just released his solo effort, “Great Unknown” and is touring behind it hitting up Pittsburgh Winery this Thursday (9/3). I want to thank Sean for taking the time to participate in this edition of First/Last.

The first album I can remember going to a record store and buying is Green Day’s “Dookie”. It is still as good as it was then and inspired me at a young age to get into rock and roll.

The last album I bought was Mac McCaughan’s “Non-Believers” from him at a show. Mac is the owner/founder of Merge Records and frontman of Superchunk. I was his sound engineer at the venue I work at. Was blown away by the performance and had to get his LP. This is how I buy most of my music since I work at a music venue.

This is an impossible question to answer. Here’s four: “Dark Side of the Moon” Pink Floyd, “For Everyman” Jackson Browne, “TNT” Tortoise, “Spelled in Bones” Fruit Bats.

All of the Grateful Dead’s live albums…ha-ha. LOVE their studio music but most of their live recorded stuff is unbearable.

X-Fest!!! I believe the Stone Temple Pilots were the headliner that year. I got tackled by a drunk guy and my best friend started crying. There were bonfires everywhere, people were throwing chairs and blankets into them. I discovered what marijuana smelled like for the first time. Also, had a crowd surfer land on my head. Quite the experience…

My band, Onward, Soldiers, performed two nights ago in Wilmington, NC to an amazing crowd. The night before was Asheville, NC singer/songwriter Nikki Lane. As I mentioned, I’ve been working at music venues for the last 7 years and catch at least 2 to 5 shows a week.

Roger Waters “Dark Side of the Moon” tour at Post-Gazette Pavillion and Fruit Bats at Garfield Artworks. Seeing even one member of Pink Floyd in the flesh was unreal. Getting to watch Fruit Bats with about 80 other people, front row, in a tiny venue was surreal. The crowd felt like they were part of the band, everyone was singing together the whole time.

It was some holiday concert at Metropol. I went for Jimmys Chicken Shack, who were awesome, but discovered Nickleback for the first time and it was painful to say the least.

I cut my teeth in Pittsburgh. I performed twice a week for 5 years with the Pittsburgh Songwriters Association. It helped me overcome stage fright and get comfortable performing in front of people. I attribute all my live success to those early years with the PSA. Shout out to Van the man, wherever you are.

Thanks, Sean. That least fave show sounds horrible, not for the bands but that venue was the worst concert venue there ever was.