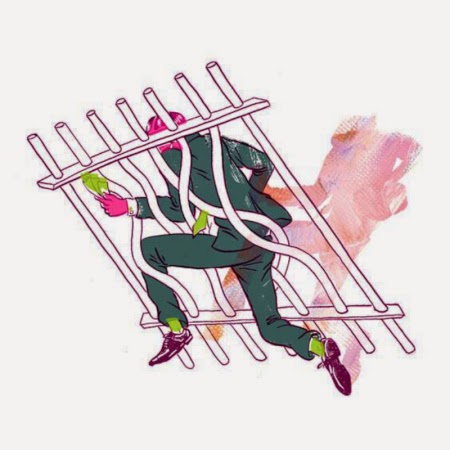 “There are plenty of musicians who write music with dark themes; a lot of it just comes from overactive imaginations. Then there are musicians like Shaky Shrines songwriter Braden Faisant. He, uh … actually works in a cemetery all day. You might feel a bit uneasy when you throw on Shaky Shrines’ full-length, Mausoleum, even before the music begins. It’s by design. The death-comes-for-us-all vibe starts with the cover art (pictured above), which depicts the band’s members attending what appears to be bassist Nate Campisi’s funeral. Then take a look at the track titles: “Strangers’ Eyes,” “Dark, Dark Houses,” “Someone’s in the Basement.” – Andy Mulkeren (Pittsburgh City Paper)

Check out the band at their official First/Last.” target=”_blank”>Website, Facebook, Tumblr and BandCamp. The Pittsburgh ‘psych-garage rockers’ are preparing for the release of their new EP, “Hocus Bogus” and will be playing selections from it at Brillobox this Thursday night with fellow freaksters Outsideinside and Aqua Nebula Oscillator. I want to thank Braden Faisant (Keys/Effects/Vocals) and Nate Hanson (Guitar) for taking the time to participate in this edition of First/Last.